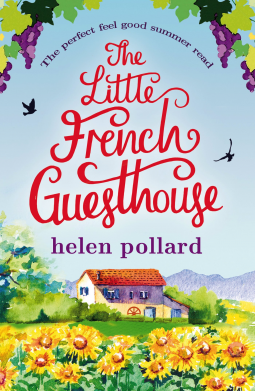 Emmy has persuaded her boyfriend, Nathan to take time off from work and take a holiday. They have spent the last five years doing nothing but working. They know it means that they will have to work hard before they go on holiday and work even harder to catch up when they come home, but for Emmy she thinks this extra effort will be worth it, to maintain their relationship.

So they find themselves in the French countryside, in a guesthouse, belonging to Rupert and his wife Gloria.

Nathan finds something else in this guesthouse, the owners wife, Gloria and decides to take time off from his relationship with Emmy as well as from work. Emmy has to process this whilst dealing with Rupert who falls and injures himself and quite possibly might have had a heart attack.

The relaxing holiday Emmy was after is perhaps not what she is going to get.

Thrust into a situation that she cannot control, that she cannot market and put a spin onto the positive side of it all, she finds herself helping Rupert in the guesthouse. Her guilt for what has happened makes her feel responsible, which is one of the quirky but frustrating ways in which Emmy’s brain works. She has plenty of others as the book progresses.

The French countryside, the smell of good fresh coffee, croissants and the warmth of the sun and the locals in the village, soon calm and act as a balm to Emmy. She finds herself suddenly involved in everything and makes new friends and lovers, it seems that Nathan is perhaps just becoming a distant memory.

Even after extending her holiday for a week she will have to return to England and face Nathan somehow. Emmy leaves all the colour and vibrancy of the guesthouse and newly formed friendships behind that she has embraced in such a short period and returns home.

But can those holiday dreams that she knows everyone comes back with become a reality?

This book is lovely, charming and heart warming, I felt like I was on holiday at the guesthouse too. It does not have the falseness of some chick-lit, which here is a good thing it has much more substance than some I have read. I cared a lot about the people and was drawn into the surroundings very easily. Which is why I enjoyed it so much and would love to know how Emmy deals with the choices she makes.

The Little French Guesthouse is out today.