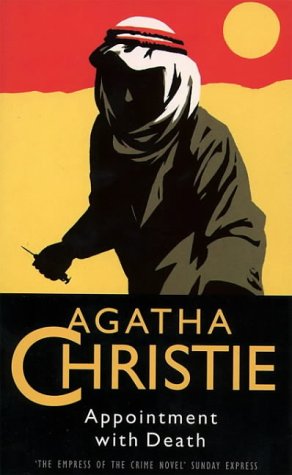 This is one of the Christie books which was inspired by her travels to the Middle East with her husband.

We are taken to Petra, The Red City which can be found in Jordan, with the Boynton family, four children, one daughter in law and a tyrannical mother who used to be a wardress in a prison. Hanging on their coat tails for some reason is Jefferson Cope.

In Petra we meet other people, Sarah King, newly qualified as a doctor. Dr Gerard an eminent doctor in the field of psychology, Lady Westholme a member of parliament and timid Miss Pierce a former governess.

And of course there is Hercule Poirot and he has the most significant piece of evidence which he does not know at the time when he overhears:

The she in the case of this book is Mr Boynton. The only clue on her body is a puncture mark on her wrist. It looks like poison.

The only problem is that she was in full view of everyone at the entrance to a cave, whoever killed her would have clearly been seen by someone.

Poirot gives himself 24 hours to solve the mystery by simply interviewing everyone and piecing it all together along with the evidence he already had. Could I make the conclusion before Poirot announced it. Simply no, I have yet to be able to work a Christie out.

An excellent example of Christie’s work and one I would go to if you need a strong example of her writing. I enjoyed the references to the other cases that Poirot had been involved in and the way his little grey cells are continually working and being challenged. Crime seems to follow him around as characters comment on within the novel.

Despite having seen the television adaptation in 2008/9 with David Suchet, the book is absolutely nothing like it. The adaptation deviates far from the book, so if you have seen and not read then have no fear.

I read this novel as part of the 1938 club which is being coordinated by Simon from Stuck in a Book and Karen from Kaggy’s Bookish Ramblings.

Whilst I could have perhaps chosen a book which was a bit more unique and not as well-known. It gave me the opportunity to read a Christie, update my challenges for the year and expand my Christie Reading List and remind myself why they are such great crime novels.

I look forward to seeing what the next year could possibly be?

Have you joined in? Let me know what book you read?