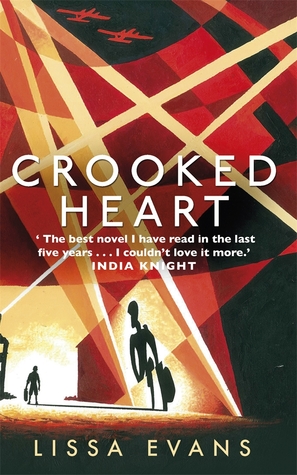 Noel is living with Mattie, despite not being related. Mattie we are told is his godmother. But Mattie is not coping very well and her loss of memory has become worse and whilst Noel has managed to help her, it seems that it is now beyond Noel’s ability to keep her and himself safe.

No one was around to help them and they did not actively go looking for it. The ending was not going to be a peaceful one.

Suddenly alone in the world, Noel, is thrust upon distant relatives of Mattie’s, who seem with relief when the mass evacuation of children from London at the onset of World War Two, get Noel away from them for good.

As an evacuee he ends up in St Albans, not that far geographically from London in some ways but miles away from the life that Noel knows. No longer is he being challenged, his education is not what the other evacuee children have and he is very much an outsider.

But so it seems is Vee, the woman he has been placed with. She is living with her mother who spends her days writing letters to Churchill about the state of everything not just the war. A son who has managed to avoid the call up and uses this to his and many people’s advantages. Vee is trying to survive both financially and emotionally and it seems the only way she is going to do that is to use Noel as well.

With opportunities to return to London, Noel can see that perhaps there is a life after the death of Mattie and that he can use Vee as much as she is using him.

With some difficulties to face, I was instantly with Vee and Noel the whole way through the book. their actions might have been illegal and immoral but they were fighters and survivors. In the way that the author has told this story, the books is about all of that. The backdrop of the Second World War showed that everyone was fighting and surviving. I learnt from this book, which is always what I try to do when I pick up historical fiction, it covered a part of the war that perhaps is overlooked and brushed away. Just because there was a war on, did not stop those who were less scrupulous.

An excellent read and I will be looking out for more by this author.

Crooked Heart is out now in all formats.