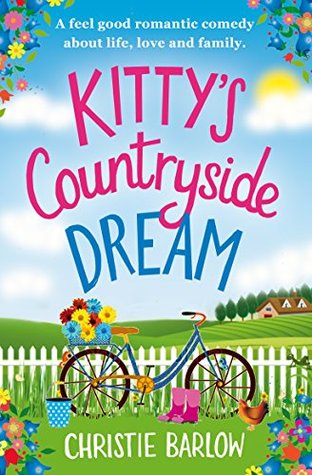 Kitty finds herself suddenly alone in the world. Having lost her father when she was very young, at the age of 25, she has just lost her mother. She is rather lost and bereft.

However, it transpires she has a grandmother who has now left her Bluebell Lodge and Kitty suddenly finds herself not alone anymore.

Bluebell Lodge is a farm, a chicken farm, with lots of chickens. Trouble is Kitty knows nothing about chickens.

There is a lot to learn and the locals are there to lend a helping hand or two. Tom the farm manager, picks Kitty up and shows her the ropes, but it seems he is rather distracted. Jeannie, another worker on the farm, has her own secret to keep and her brother Robin, seems to only have eyes for Kitty. Lucinda the local baker relies on the fresh eggs from Bluebell Lodge and becomes friends with Kitty due to Kitty’s love of Lucinda’s flapjacks.

Kitty now has people in her life, people who care and want to see her happy. Even perhaps in love with her.

Kitty though still has a number of unanswered questions regarding her grandmother and with no parents or other family to ask, it seems that the mystery will remain that.

Until one day a discovery at the back of the farm safe leads Kitty on a journey back into the past. The diary of sixteen year old Violet seems to have some names in it she recognises.

Kitty might have some answers to the questions she has, but does she want to hear them?

This novel is very much in the style of Trisha Ashley, Carole Matthews, Cathy Bramley et al and if you are fan on their work you will certainly enjoy this novel.

There is plenty going on with all the characters not just the main one Kitty. Whilst I did guess the paths that this story was going to go down I still immensely enjoyed it as the writing was really good and the insertion of the diary entries of Violent gave it that dual narrative which I do enjoy in novels.

What made this novel for me, is I want a sequel to catch up with them all at Bluebell Lodge, but if one never comes then that does not matter. The book ended in the right place and it gives the reader a chance to use their imagination in what happened next.

Kitty’s Countryside Dream is out on 25th February.