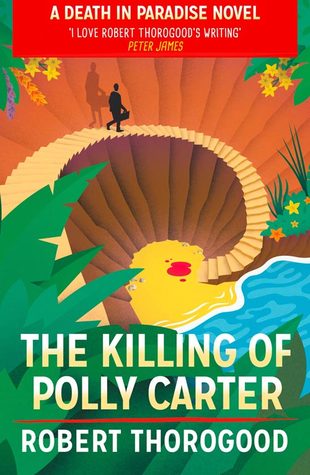 I am lucky enough to have received the second Death in Paradise novel via netgalley, which I was delighted to accept and even more delighted to read.

The first A Meditation of Murder sets the scene and characters for those who have not watched the original television series. This the second, I think is very much more comfortable as a novel than the first, Robert Thorogood seems to have found his writing way.

Clearly from the novel’s title we know the victim’s name, so Polly Carter’s death comes as no surprise, but what does come as a surprise as it was suicide.

The age-old question – Did she jump or was she pushed?

The only other person there at the time was her wheelchair bound sister, Claire. She argued with her before her fall to her death.

Her sister’s nurse, heard raised voices whilst walking back through the garden to the house.

Two other guests as Polly’s house saw the nurse in the garden. The nurse saw one of them at the window of the house.

They all seem to have alibis, therefore it could not have possibly been one of them.

But of course there is more to this death than meets the eye. We have secret tunnels, drugs, fame, affair and a yellow coat.

Of course it is all in a day’s work for DI Richard Poole, and his wonderful team, Camille, Fidel and Dwayne. They have questions which lead to other questions, they have theories that lead to other theories but in the delightful way of an old-fashioned murder mystery which I happily place this one it will all come together in the end.

The denouement of the real murderer reminds me of the gathering of all the suspects of a Poirot novel and it works, somehow the simplicity of it all works. In this novel is the added bonus of the visitation of DI Poole’s mother, someone who is only referred to in the earlier episodes of the televison series.

This book has the whole package if you are looking for a complete murder mystery novel with the added bonus of sandy beaches, blue skies a laid back way of life and a very stuffy English policeman clearly out of his comfort zone.

I am really looking forward to the third novel and the new series of Death in Paradise starts tonight on BBC 1 at 2100.