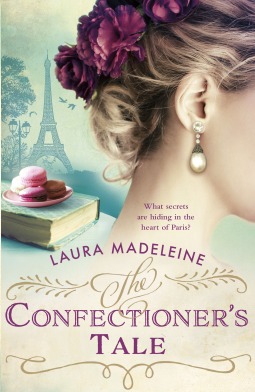 In this book you are whisked away to the first ten years of the twentieth century, to France and to Paris.

A young man sees into another world. A world full of creation, full of cream, chocolate,pastry, air, caramel, sugar, precision and skill.

A world which he will never belong with his calloused hands and skin from working the railways.

But then this man meets someone and it looks like his life will change and he can inhabit another world.

The world of Patisserie Clermont.

Eighty years later, a PhD student, Petra discovers a photo of the Patisserie Clermont amongst her grandfathers items. She does not recognise the place or the other people in the photo and the words “Forgive me” written on the back spark an interest. Putting her own studies at risk,  she begins to try and find the truth about this photo and the man she knew as her grandfather.

However at every turn she always seems to be too late and why would anyone else be interested in a story about her grandfather….. unless what she believed to be true about him was not..

This dual narrative tale does I admit take a while to get going, it has a very slow spun pace to it, in some ways like the creations being made in the Patisserie. However reflecting back I can see this is all about spinning the story building the moment when we find out the truth. But will it be the truth that we were expecting?

I was slightly disappointed with the end result as I felt it could have been so much more. That is just a personal preference though. The descriptions of the Patisserie will have your mouth-watering, and the way you are taken back to Paris was beautifully described and clearly plenty of research had gone into the areas that you could find yourself in at that time and it was all brought vividly to life.

A promising start for this debut novelist. I look forward with interest what else she writes.

Thank you to netgalley and the publisher for allowing me to read this book.

The Confectioner’s Tale is out now.