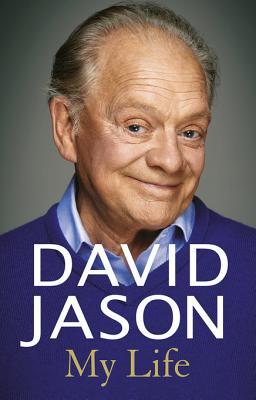 David Jason has been apart of my life forever. I adored watching him as Granville in Open All Hours, I remember being encouraged to pick up H.E. Bates Darling Buds of May, after watching him on the television. Del Boy in Only Fools and Horses keeps me laughing to this day, despite having seen them countless times and his DI Frost is always the stark contrast in which one man can play two so differing roles.

And I was fascinated as a child that he played Blanco in Porridge. A fact which I have clung onto and many times has been a godsend in quizzes and trivia. I have caught many people out with this one!

This was a book I was going to enjoy reading and so I did. I savoured everything in it. We start from the very beginning of his life, born during the Second World War and are taken on how he has made it to the man we know today.

But do we really know the man? This is a book which concentrates on his career, how he worked hard, slogged in fact to make it in various productions long before he graced our television screens. If you want a book purely about his personal life then you will be disappointed. However there is enough ‘domestic’ anecdotes to keep the book very real. Names are dropped in where they are relevant but Jason keeps it all professional. That made it a much better read in my opinion, no mud-slinging and his deep honesty when dealing with some very private problems, such as nursing his partner, gave me more respect for what he had chosen to write about and share.

Of course there are some wonderful anecdotes of a number of prodcutions and programmes he has featured in and some he has not and of course plenty about the legend that is Ronnie Barker, ‘The Guvnor’ and the poem that he sent Jason on the announcement of his knighthood is how the book ends and how I will end this review

And Del Boy, Frost and others had

All served their nation passing well,

So here’s to Granville, Frost and Del!

The old ex-Guvnor’s proud to see

His comrade reach such high degree,

Knight of the Realm, and TV star

Who never thought he’d get this far.

The sword upon your shoulder lay.

I raise a glass filled to the brim

And truly say, ‘Good Knight from him.’