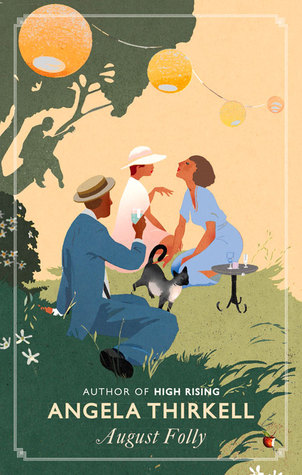 This is my second foray into an Angela Thirkell novel. If you want a gentle paced story which is reminiscent of days gone by, a specific period setting, where problems such as your daily help not being much good in the kitchen, or what the neighbours son is up to with a visiting female then these are the books for you and in particular this one.

Richard is back from Oxford, a long break awaits him as he decides what to do with his future. Back in his parental home, with his rather quiet father, rather worrying yet clever mother and a sister, Margaret just starting to blossom makes Richard want to seek adventure elsewhere. Especially before he has to decide on what work he is going to have to take.

In the village for the summer is The Dean family, a large family with numerous siblings, all coming and going. They live a very different way to Richard and Margaret and show them what life can be like in the summer in a village. In fact a number of the Deans turn the heads and hearts of Richard and Margaret in some rather humorous and touching ways.

However, in all villages as is a given. There is always someone who is trying to gather everyone into their fold. In this case it is Mrs Palmer, who for previous summers has always made sure a play is staged. This summer is no different and with extra people around with the Deans, it is obviously going to be the best yet. Mrs Palmer has not taken into account, the Deans.

A nice read, if any book can be as such. It starts, it progresses and it finishes. Nothing revelatory or heart stopping. Gentle reading at its best.

I look forward to reading some more Angela Thirkell as my reading journey continues over the years.