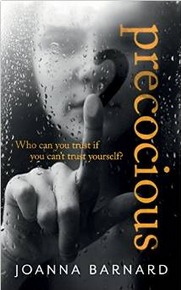 Fiona remembers when she first met Henry Morgan. At school. She was 14.

Fiona thought Henry was the adult she was missing in her life. Fiona could trust Henry.

Henry told Fiona she was different.

She meets him again, years later. A chance encounter in a supermarket.

Those schoolgirl feelings rush to the surface, they speed head long into Fiona’s love and she stumbles into the relationship with Henry she could not have when she was 14.

Told from Fiona’s perspective as narrator we embark on what is a very difficult story to digest. Whilst schoolgirl and teacher scenarios are well told in stories and now reported more and more in the news, due to abuse of position, influence, age difference, lives broken, alleged sexual activity, it is not a plot or background to a story that I have ever read before.

Fiona shares her inner most thoughts and secrets from her friendship back with Henry when she was 14 and her relationship with him now. The past and the present are so caught up with each other that it is difficult to see where the future lies for any of the characters.

“The past is nothing but smoke and mirrors. Made up memories and unreliable stories. You said it yourself. Shadows. The only thing that’s real is right now.”

Is Fiona unreliable in what she is telling us or is it simply that she has created a memory that is not correct?

The book is gripping and you have to read to simply understand what is the past, what is the present and which memories are true. Simply in this book – who can you trust?

A début novel which tackles a controversial subject which draws you in, in an almost voyeuristic way. You don’t want to know, you don’t want to acknowledge what has gone on, but you have to know.

Precocious is out now in hardback and e-book.

Thank you to the publisher for providing me a copy for review.

Not necessarily a book I would choose, which is why sometimes when you get ARC you sometimes have to take a chance on them. Some will work for you others will not. This worked for me, but it left me feeling as I say in my review I have witnessed something rather unpleasant.

I have also reassessed by star rating on GoodReads and Amazon for this book. I put it at 3 stars, but that was because of the topic, it made me feel uncomfortable not because of the actual writing or structure. So I have amended to 4 stars.