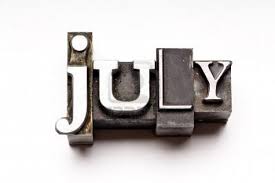 July is a long month, but it seems to have sped by reading wise, working wise and everything wise!

I never thought I would have read as much as I did but it seems that I have. Plenty of new stuff and familiar authors to, but it has been a female author dominated month along with a kindle one too.

Not much murder this month, but sometimes you need a break from all that and in some ways I go that from Robert Thorogood – A Meditation of Murder*. What made this even more delightful was the fact that it is based on the television series Death in Paradise, one of the few programmes I do enjoy. I hope there is more to follow at some point.

Adding a bit of mystery and some romance, was the short story Antoine Laurain – The Red Notebook* which I had seen recommended on other blogs. It was also a translated book, which is not an area I venture into much. It was a wonderful short and sweet little read.

Another short and little read, in more ways than one was Alan Bennett – The Lady in the Van*. It is a while since I have read a book so small. It is an example of the great British writing that is Bennett, and is probably only understood by those who understand are quirky humour. I will be interested to see how the film does across the globe.

So that was the male authors what about those female ones and no doubt they would be full of great female characters. No more so than Adele Parks – Spare Brides* which was the last book I finished in the month. It is a great departure from Parks normally writing and it was a book which had to be savoured it took a lot longer to read and rather an impact in a very subtle way. More about that in the review.

Ali McNamara – The Little Flower Shop by the Sea is a great holiday read and one for sunny days and even wet and windy ones. Another book this year that has taken me to Cornwall. I think I seriously need to visit one day!

Staying in the south-west took me to see Marcia Willett – Indian Summer*. An author I have read before quite a while ago and it featured some names that have jogged my memory from a while back.

And yet again, staying in that part of the world I embarked on a new author for me Claire Sandy – A Very Big House in the Country*. A number of different families all sharing a house in the country for a holiday and learning rather a lot about each other and themselves.

The book which does fit into any comfortable pigeon-hole or genre is Joanna Barnard – Precocious* it was not a comfortable book to read, but rather like reading someone’s secrets when you know you should not be – but you cannot help yourself. You are drawn in. Not quite a thriller in the normal sense, but a book which had you rather questioning everything.

A mix of the familiar and the testing in some ways. I go into August reading the new Veronica Henry which is not out until September, but more on that later!

How has your July reading been?