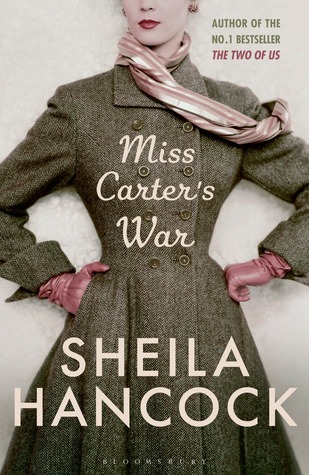 Miss Carter’s War is not the Second World War which she has left behind, after working for the Special Operations Executive behind enemy lines. Her war is one she has chosen to fight herself to educate girls, to prevent another war and to fight all that is not far about society.

This book has reminiscences of The Prime of Miss Jean Brodie, but for me it was this  book that resonated more with me than Muriel Sparks novel which I struggled with.

Miss Carter seems to be almost a round peg in a square hole, she will not work to the norm and she fights for her girls and can see the potential in some of them, but fails to understand that this potential cannot always be reached as the class that they live in and the society of which they belong has other ideas for them; marriage and babies.

There is very little alluded to about the Second World War and I thought I was going to get more about the SOE and what happened to Miss Carter before. I was disappointed I did not, because this would have been interesting. What you do get, is a story of the decades post war, a story of society and how attitudes change and move on. We watch as Miss Carter tries to fit in and continue to teach and believe in something that she started out on at the end of the war.

A very interesting story which focuses on Miss Carter and her close friend Tony. Miss Carter was determined if somewhat naive throughout her life and I felt at times carried along into some beliefs because of others as opposed to her own independent thought that she started out with at the beginning of the novel. This all added to her character traits and towards the end of the book, finally I felt she had found what she was looking for.

It is always interesting when a well-known person, embarks on writing a story and I think Sheila Hancock’s attempt with this book should be commended. I feel her presence within the novel and she has obviously used her own experience and views of what has passed since the end of Second World War to give this book the backdrop needed for Miss Carter’s story.

I always enjoy a good ‘school’ story and have done since I was small, added into that the history and backdrop of an ever changing society meant it was a book I would thoroughly recommend.