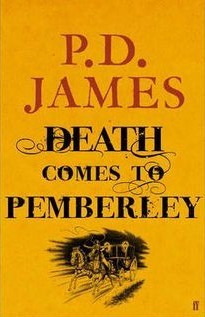 One always wonders what happens after you read the final page of a story. Nothing beats your own imagination I am sure but of course other authors imaginations get the chance to grace new books.

In this one, we are back at Pemberley, Elizabeth Bennet got her man and lives a peaceful existence with her two children in the vast estate. Her favourite sister Jane is not far away and she has the company of Georgiana Darcy, her sister-in-law.

Pemberley holds a ball every year and it seems that the ball of 1803 is going to be very different. The night before a coach arrives at Pemberley, and disgorge the hysterical Lydia Wickham Nee Bennet. She has left her husband, George Wickham and his friend Capt Denney in the woods after an argument.

Darcy sends out a search party .

They find a body.

The murder and the mystery needs to be solved.

I came to this book knowing what happened as I had seen the television adaptation which was broadcast Christmas just gone. However I wanted to experience the book as it was meant to be and something about it does not quite hit the mark. Clearly P.D.James is not Austen and I actually approached the book knowing that I was not going to get an Austenesque novel. I did get a book which used characters that were well-known and a familiar setting and gave it legs to move onto a different story with a plot that perhaps James was used to – murder mystery.

It works on that level for me. I know it did not work for a lot of people. I am not a die-hard fan of Austen, I have not read Pride and Prejudice, nor have I read any of P.D. James work. My only knowledge was of the story of Pride and Prejudice and the adaptation of the book.

I enjoyed the book, it was slow in parts and it did not grip me, (probably because I knew what happened) but it is a worthy novel and if you like to read anything that is an offshoot of Pride and Prejudice then give the book a go. As long as you know what you are getting you will be fine.

It has taken me an age to review this book, probably because it took me an age to read (for me anyway). I found it scholarly and that will have slowed my reading down but I enjoyed it. I know it is a book I should have reviewed straight away as I think I would have captured more of the feeling of the book.

I will treasure my copy though as it is signed by the author and dedicated to me. (If anyone can translate for me the word after With Every ? I would be most grateful)