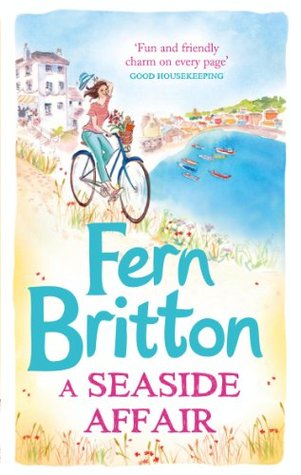 There is nothing better than bringing a community together than trying to save a local landmark.

In the case of the residents of Trevay, it is the local Pavilion theatre which is going to be sold off to a multinational coffee chain, a familiar story of the twenty-first century.  If you have read any of Fern’s previous novels you will recognise some familiar characters, first introduced to us in Hidden Treasures. Helen who has settled into Cornish life well, along with her ever grumpy and moody man Piran. Helen’s friend Penny a hot-shot flying television producer who has found love and life being married to the local Vicar.

Of course there are lots of new characters and these are in fact outsiders to Trevay, they seem to have all come to this Cornish town for varying differing reasons. The common denominator of them all is the pull of The Pavilion Theatre.  Jess is an actress but not a successful one, rather in the shadow of her actor boyfriend the nations current heart-throb.  Brooke Lynn is the face of the new coffee chain and model with a rather famous background. Ollie, an actor who has family near Trevay and seems to be trying to make it big, but finding it difficult when you are dating the world-famous Red.

Mixing these outsiders in with the locals obviously causes some wonderful scenarios and situations that Fern Britton mixes into the plot of her novel with skill. Yes it can be a bit predictable but there were plenty of will they won’t they, should they shouldn’t they moments as well as a big dollop of what life in ‘show business’ is really like. Of course trying to save a landmark like The Pavilion Theatre is going to have its problems and things do get a bit nasty for a while, but as they say it will be alright on the night!

Fern Britton’s skill has developed at writing has developed as her books have gone on. She could easily now be up there with the likes of Trisha Ashley and Carole Matthews. What I like about her novels, where she naturally strays into territory she is familiar with, she actually gives you a real insight into it. It is not just research it is first hand experience that Fern has managed to fictionalise and make for a good story. It is all made to be believable with the skill of being able to create a story to lose yourself in.

I seem to be on a bit of a roll at the moment, reading novels which are based in or set around Cornwall. Who knows why – it is where my reading is taking me so far in 2015. I did have to consciously stop choosing the next book to read as it was based in Cornwall, for the simple reason I felt I may get confused with all the characters and places.

I have now added Fern Britton to My Author’s List of Works for anyone that may be interested in her other novels.