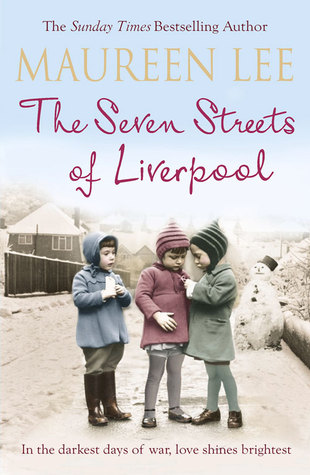 It is very hard to write a review on the fourth book in a series when it is some fifteen years plus since  you have read the first three. My memory needed a bit of a refresh and because I did not review books way back then, I felt I was starting to read this book with no prior knowledge.

However, I was soon back in Pearl Street and it was familiar territory. Some characters and events I had remembered others I have forgotten and so I just let the story sweep me along.

The device of using the first and last chapter as part of a ‘reunion’ to be able to tell the story of the characters during the Second World War was rather a waste of pages and words. It brought nothing to the story at all. It could quite easily have been an epilogue in case you needed to fit all the pieces together.

As with the whole Pearl Street series, Lights Out Liverpool, Put Out the Fires, Through the Storm, the characters are strong women and their love for their families and the men they choose, even if they might be a ‘wrong-un’. Add to this the community spirit that was forged during the dark days of the Second World War. Everything was make do and mend and the worry was whether your children were going to be called up if they reached of age and where your husband might be fighting. Add to this the war on the home front and the bombs falling in Liverpool these books though, historical sagas for want of a genre do a wonderful job of giving some insight into social class and life at home during the war.

I have read all of Maureen Lee’s novels, it is almost now a yearly event for when the paperback version of her latest hits the shelves. I will be honest and say that some are a lot stronger than others but if you do want something which is a simple read, then you can do no wrong with this author. I just hope that she does not return to Pearl Street, for I fear I will have to back and reread them first.

Reflecting upon this review I can see that I have actually failed to mention the plot and name any of the characters, that was a choice. I have also not posted a review on Amazon.

In a similar vein to reviewing all the Agatha Raisin books I was a bit lost as to what to write about as the story has a rather predictable (perhaps well worn?) plot. Not that that should detract from the overall enjoyment that the book gave me.