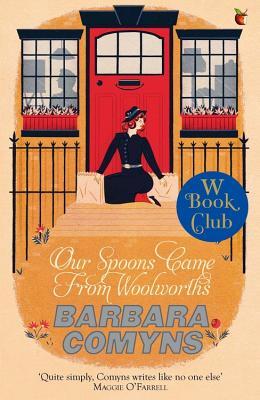 The reason I bought this book is simply because of the title. Woolworths was a memory of my childhood, from being separated from my mum, to the pick and mix, to even remembering getting meat cut at the meat counter, it was where I bought my first single on cassette and where you went to buy your Easter eggs and Christmas chocolate. If you needed something you would find it in “Woolies”.

As does Sophia, she got her spoons in Woolworths. Except this is not the mid-eighties but some fifty years earlier in the mid-thirties.

Sophia has embarked on a marriage and I fell in love with her voice as from the beginning she tells us how she fell in love with Charles, a painter and the life they embark on together. The trouble is although they are people within society, they have chosen to live a bohemian life rather away from the constraints and rules of normal society.

It is funny to begin with and you feel the adventure that Sophia is on as she tries to embrace marriage, motherhood and ultimate poverty whilst maintaining this façade that her life is in fact the way she would have chosen it and she is of course happy to anyone observing. We are chosen to observe but we can see that Sophia is not happy.

However, a number of events have a life changing effect on Sophia and she experiences some truly happy moments amongst the tragedy.

This book is a glimpse into the private life of the author, as there is some autobiographical parts to this story, but also a glimpse into society and how you were treated when you were outside of the social norms.

Sophia is full of dreams as is her husband Charles, who just seemed to be dreaming of himself all the time and had no care for anything else. He thinks he is successful, therefore he must be, despite not being to make a living from his painting and relying on many others, and especially Sophia to survive financially. What an egotistical fool. I got the impression his work was not up to much.

The descriptions of childbirth, make you glad you that much has advanced in these years and that the surroundings that Sophia found herself in at different moments throughout her journey in the early part of her life were described so well it was if you were with her.

I had no idea where this book was going to take me, I just went with everything that Sophia was telling me.

This is a relatively short novel, and a rather quirky one and from an author I have never read before or knew anything about. It is a book I would thoroughly recommend to anyone to just get a glimpse about how life can be lived and that you can pull yourself out of many a situation if you have the gumption to see the other side of what life can be like.

Happiness is found in dreams and in reality.

A risk to take, picking up a book just because of one simple word in the title and the memories it brought back. A risk that paid off and I think I would be most interested to read some more Barbara Comyns in the future.

Have you read any? What should I read next?