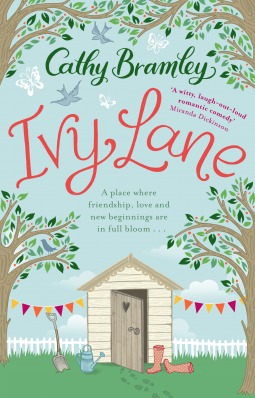 Ivy Lane was originally published in four parts at the end of 2014 and whilst I did know of its existence, for some reason I had not really considered the book. I had been missing a really good story and if you are a fan of Trisha Ashley and Katie Fforde’s work then you are also missing a good story if you have yet to read this novel.

Tilly has had something very tragic happen to her, interestingly we actually do not know what that is at the beginning of the story , which adds to enjoyment of the book and keeps you reading and of course guessing. I had my suspicions, thought I was right then something happened and I thought I was wrong, but no my first instincts were correct, but the talent of the authors writing made me keep questioning.

Tilly thinks that having a new job in a new area and an allotment will mean that she can keep herself to herself and that she will be able to lead a peaceful life without any intrusion.

The Ivy Lane Allotment community have other ideas. As she starts to tend her allocated piece of ground and learns  the hard way in some cases she realises that as she grows plants, flowers and vegetables she is also growing a new life for herself. The book is split into seasons and through each one we see different exciting events happen, Christmas parties, fundraising, bad weather and even the appearance of a TV crew.

Through all of this, Tilly makes friends, she becomes wanted and needed by some more than others and experiences something that she never thought she would again. But I am not telling you what that is, you will have to read the book to find out!

I look forward to reading the new novel Appleby Farm when it is released as a whole book.

Ivy Lane is out now in all formats.

Thank you to the publisher and netgalley for allowing me to read this book.

As I say in my review this was originally in four parts but actually I was glad I read it as a whole. I have previously read a story in four parts by Harriet Evans and whilst I enjoyed the experience, I am not sure I would like to read all my novels that way. Sometimes when the story is just so good, you want to keep on reading and reading until the end.