The detective duo of Arthur Bryant and John May are back in this their twelfth book. If you have  never read any of the Bryant and May series before then you need to know – both Bryant and May are detectives in the PCU – that is the Peculiar Crimes Unit. A unit which is full of waifs and strays, people with eccentricities that no other unit within the police would put up with. And you are never quite sure how old Bryant and May actually are.

You can pick these books up in any part of the series, they read as standalone novels and this one is no different. 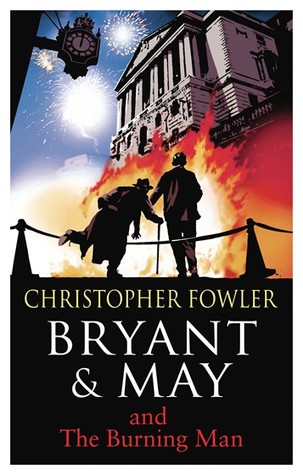 London seems to be caught up in unrest. There is rioting, buildings are being damaged and fires are being started. London is at risk of the mob taking control. The reason for this unrest – a banking scandal. Is it covering something else up when a man is killed during the riots?

Then other deaths occur, nothing seems to link them. It is just a tragic coincidence. But for Bryant and May they follow a simple ABC. “Assume nothing. Believe Nobody. Check Everything”.

And so what develops is a mystery to many but Bryant especially it has all the peculiarities of something long past and something that should perhaps not be forgotten.

The riots are an interesting background to use for the plot line for this book, and I think they give a good example of society today, which is perhaps a sad indication of the way society has moved…

“I hate what I see around me…The urban middle class destroyed, the working poor exploited, the vulgar rich elevated to eminence, the underclass demonized, the wasteland of celebrity held in veneration”.

The role of this unit is to find all the missing pieces however bizarre and whatever unorthodox methods are available and come to a conclusion…… “not for what we know but for what we don’t know, and that is why we are detectives, because we always want to finish the picture.”

And as the tale weaves the realistic and unbelievable moments together, as well as some rather graphic descriptions which are not for the squeamish, so seamlessly that you become involved in the case and start to care about all those who are in the unit. With probably the exception of Raymond Land, the Unit Chief who seems to be missing out on actual policing and the pleasure of teamwork and actually solving crimes.

If anything this book is so relevant of what is going on in the country now and although perhaps we have not got to the stage of such riots and fire the banking scandals struck a chord and it felt like I was reading newspapers about recent banking and expenses scandal or watching continual news feed of such events which seem to have fired a nation into wanting the truth. The Peculiar Crime Unit wants the truth and so did I as the book reached its conclusion.

Although the plot and background events are very much of a modern era, Bryant and May are not, they are detectives of a past age, ones who do things their way and get results, much to the chagrin Raymond Land, the City of London police and the Metropolitan police. This coupled with the wry observations which make you smile as well as the historical elements to the novel make this a definite read for 2015. If you want to experience Bryant and May then this is a good book to start with.

Thank you to Doubleday for providing me with a copy of this book. The Burning Man is out today in hardback.

I have previously only read two Bryant and May novels and have always enjoyed them, especially the eccentricity and the historical elements of them. I must not wait so long before reading another!