If you have followed this blog for any length of time, you will probably have worked out who some of my most favourite authors are. One of these authors has embarked on an adventure and a challenge into the unknown and is going to delight us as readers.

The Seven Sisters by Lucinda Riley is the first of what is going to be seven (yes seven!) novels.

I was lucky enough in September to get a sneak preview of this book and a wonderful lunch with the author herself as well as some fellow bloggers and lovers of reading. (More of that in another post).

What has fascinated me even before picking up this book to read is the background, the inspiration and the reality behind The Seven Sisters. So what do we know?

The Pleiades, also known as ‘The Seven Sisters’, is the nearest star cluster to earth situated between 434 and 446 light years away. The cluster is the source of the names of each of the sisters in The Seven Sisters series.

The Pleiades is positioned near the shoulder of Taurus (The Bull), the larger constellation to the right of Orion’s Belt. Each of the stars is over 100 times brighter than our sun, and the human eye, from any country on the globe, can see at least six stars, with a seventh which varies in brightness and is not always visible – the reason for this fluctuation in brightness is still unknown. Some people with exceptional eyesight claim to be able to see up to 20 stars in the cluster without the aid of a telescope. 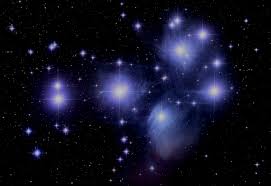 Not only do they feature in astronomy, but The Seven Sisters are tied up with myths and legends of the past. Greeks, Aboriginal, Hindu, the list seems endless.

But for all this background you do not need to know any of it to be able to read this novel. If like me you have read around it, all it is going to do is enrich the actual novel.

And whilst we get to meet all the sisters in the first opening chapters of the novel, it is the story of Maia, the eldest daughter and the one seen as the ‘mother’ and the ‘carer’. In legend the story goes that despite her beauty, she was a shy, waif like woman who preferred her own company and lived alone in the caves. At one time, her star shone brighter than any of the others. However, the next sister’s star, Alcyone, now shines brighter – which some say symbolises sibling rivalry between the two sisters in the past.

The Seven Sisters is published by Pan Macmillan and is out on 6th November.

I have read the first 100 pages and could wax lyrical about them now, but I am so excited to be reading the book, that it will have to wait. There will be more about this book over the coming days.