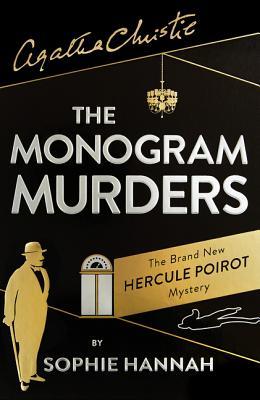 It goes without saying that for another author to take on one of the most prolific and famous writers of the twentieth century they are going to face a lot of criticism. Some for simply carrying on the baton and some for how different the work is to the original.

In this case Sophie Hannah has been authorised to write a new Hercule Poirot story. The Monogram Murders is the result.

I enjoyed it. Maybe that is because I have not perhaps read enough Agatha Christie, maybe because I actually enjoyed the story and the fact that the main detective just happened to be called Hercule Poirot. And I came to the book not expecting an Agatha Christie novel.

The story is told from Scotland Yard detective Edward Catchpool’s point of view. He knows Hercule Poirot, in fact they are currently sharing the same residence, as Poirot has decided he needs a rest. So he moves out of  his residence to a boarding house across the road.

Catchpool tells Poirot about a coffee-house where he subsequently can be found as regular as clockwork. It is there that Jennie in a state of some distress finds him. She claims that once she is dead, then justice will be done. However nothing must be done to stop her demise happening.

Of course it sets those little grey cells working and Poirot cannot help but want to know why Jennie has strong convictions about such justice.

Upon return to his current residence, Poirot discovers that Catchpool has been at the scene of three murders, in three rooms in a prestigious London hotel – The Bloxham Hotel. Something about what he says makes Poirot think that the distressed girl and these murders have to be linked. And of course only Poirot is going to unpick all the clues, red herrings and very strange statements that witnesses are making.

There were times I admit to being very confused with the plot, not because I was trying to work out ‘whodunnit’ simply because at times the story was not flowing right. I did persevere and it became clearer in the end. I had worked out some elements and red herrings and I was quite with Poirot when he questioned the validity of how someone knew they had seen the right person. All very cryptic but necessary in a murder mystery novel, set in the 1920s, regardless of its author.

For all the criticism this book is getting, I have enjoyed it. Hannah has really only used Poirot and placed him with another ‘sidekick’, to tell a story and I think that is done well and is sufficient. If she had gone and also taken the voices of Captain Hastings, Inspector Japp and Miss Lemon then maybe she would have bitten off more than she could chew as this would be a step too far.

If you come to the book having never read Christie, but been a fan of Hannah, then I implore you to read the originals. You will find some gems. If being a Christie aficionado then you may not enjoy this book so much, but give it a go and have an open mind. I really believe she has not tried to rewrite history and write a Christie novel, she has just written a story with a well-known famous character in it. I think it works, others don’t. That is the joy of reading.

I assume the estate were content with the book to have let it get this far, so I make this assumption and then get on with enjoying a story. And whilst I would admit to it not being as good as Sebastian Faulks homage to Jeeves and Wooster in Jeeves and the Wedding Belles I did not come to this book with the expectation that I am going to be reading an Agatha Christie.

It is always a very brave thing for an author to do – write about a well-known and well-loved character. Many have done it before and I am sure many will continue to do so for years to come.

Have you read this? Do tell me what you think?