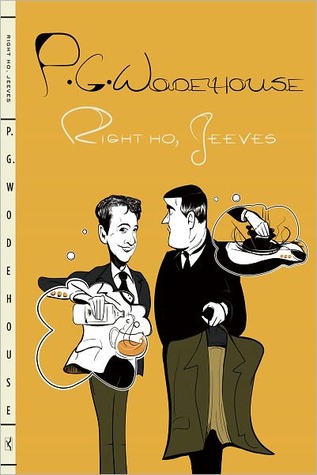 If you have never read a Wodehouse book before or a Jeeves and Wooster one, then I feel this is a good place to start, despite it being the sixth novel for these wonderful characters to feature.

I am a fan of these two and this actually stems from watching the television series with Stephen Fry and Hugh Laurie. I then much later on read the books and was hooked. This is actually a reread for me, because in a piece of zealous sorting I got rid of them all.

This is a full length novel and introduces you to a lot of familiar characters. We do not have just Jeeves and Bertie Wooster, but also there is Aunt Dahlia Bertie’s softer aunt compared to Aunt Agatha.

Aunt Dahlia needs some money for her publication Milday’s Boudoir and needs to make sure Tom Travers her husband is kept sweet and willing to provide. Trouble is they have a house full of lovebirds at Brinkley Court.

Tuppy Glossop is in love with Angela, Bertie’s cousin. Trouble is he is the jealous sort and is convinced there was someone else whilst she was away in the South of France. (It was only Bertie!) They bicker and fight and Angela takes great delight in pointing out Tuppy’s voracious appetite.

In a bid to avoid presenting awards at a school, Bertie sends an old school friend Gussie Fink-Nottle, a quiet sort of chap with an encyclopedic knowledge of newts. Who always happens to “find themselves treading upon Life’s banana skins”, especially when it comes to his choice of woman – one Madeline Bassett a friend of Angela.

There is much you need not know about dear Madeline Bassett but you do need to know that her head is full of fairy dust, she is not a female who takes your breath away from Bertie’s opinion. However, her conversational opening gambit normally starts with asking you “if you don’t sometimes feel that the stars are God’s daisy-chain”, she is a woman very suited to Gussie.

Trouble is when you stay at Brinkley Court you have to run the risk of becoming infatuated with Anatole the cook’s wonderful food. It is the only thing that keeps many a person going including Uncle Tom, Tuppy and even Bertie himself.

When the lovebirds in residence seem to have fallen out with each other and Bertie too, what better way to show their love than by not eating, it is of course all Bertie’s idea.

It is bound to cause trouble.

It is bound to be Jeeves who not only solves the problem of a temperamental cook such as Anatole but also the lovebirds as well.

It is bound to be poor old Bertie who is the buffoon who is readily saved by life’s problems by Jeeves, including wearing a white mess-jacket with brass buttons on and being seen in public.

Whilst it is quite clear “[we] Woosters are ingenious, Jeeves, exceedingly ingenious.” it is really the quiet well-mannered, shimmering magic of Jeeves that keeps Bertie on the straight and narrow away from marrying women such as Madeline and wearing white mess jacket’s in public.

A good read, no matter how many times you have read it or even seen the television adaptation – it is true Wodehouse, true Wooster and most of all true Jeeves!