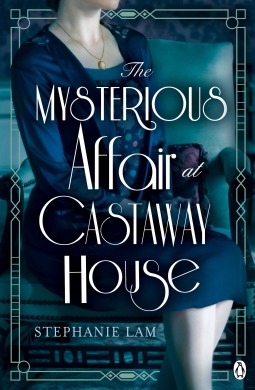 This is the début novel from this author and it features a plot device which is favoured by many and one which I confess to enjoying. The dual narrative. In the case of this book we are introduced to Rosie Churchill in the mid Sixties and Robert Carter in the mid Twenties.

Other than sharing initials their commonality is the fact that they have both lived for a time at Castaway House.

Rosie is one of the many residents of this run down boarding house, who finds herself sharing with two other girls in a couple of rooms and is befriended by the supposed landlord and his rather frantic girlfriend. The house has its mysteries as does the residents and Rosie becomes captured by what the house is trying to tell her.

Robert arrives at Castaway House some forty years earlier to convalesce it is thought the sea air is going to be of benefit. It is the house of his cousin Alec and his new wife. However nothing is as it seems, and the facade of Castaway house is hiding the truth to those in the area.

Of course these two characters and the world they now live in cross over and intertwine at some point as the truth about this house is revealed. The choice of time periods made a refreshing change, it has become somewhat of the norm to be very much during the ‘war’ years and present day. This was two time periods, where there were people still around in the sixties who can remember the twenties, and therefore the secrets were as much recent as they were in the past.

Its contrast also with the rich and the poor, the transformation of a house so beautiful in the roaring twenties, with its occupants rattling around its walls, to the sixties, with its poor structure and more people than ever squeezed in to live there.

Love is not the mystery for me in this book, it is a mystery though about those who came before, who admired the same view, slept in the same rooms and walked the same path and those who came after and their stories. It is this which makes this a very mysterious novel and one where you are cast away into another place and time.

An excellent début and an author to look out for.

Thank you to netgalley for my copy.

I think this is going to be a book, which within a few months a lot of people are going to be on about. It has that ability to be around and then suddenly become popular.

One thought on “The Mysterious Affair at Castaway House”