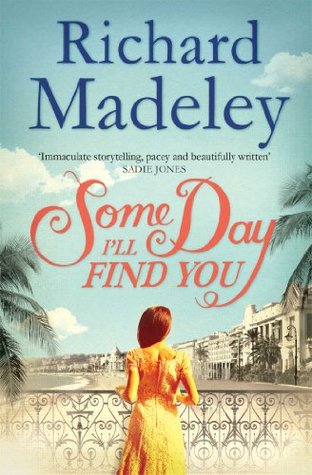 I am always suspicious when well-known celebrities, presenters and tv personalities start writing fiction. The cynic in me wonders whether it is merely some poorly paid ghost writer who has spent hours churning out the words and plot.

The cynic here is not needed, as Richard Madeley’s first foray into fiction (as opposed to memoir) is that of genuine storytelling, a good plot, believable characters and the seed that is planted that maybe these fictitious events around World War Two did actually happen. It has to be partly believable to work.

Diana has fallen for the charm of  brother John’s friend and fellow pilot, James Blackwell. The eve of war in Europe means that life is suddenly on fast forward. Love, courtship and marriage are dashed through with speed. However, death can come just as fast.

Events move to France, where years later a glimpse of the back of a head, the sound of a voice starts to bring back memories, in the speed that they originally occurred. Can it possibly be? Is it actually believable?

What follows is very much a thriller where you are transported from war to warmth in the South of France. I felt that I had been transported as well, with the descriptions of the cafe, the market and the locals as the author brought this to life and with some prior knowledge of the area I am sure.

But I also felt this sense of foreboding as Diana and her parents were enthralled as John and James Blackwell embraced life in the RAF and the thrill of being in the skies and even more so the thrill of war. The undercurrent to all this bravado and thrill was the worry of death of no one returning.  “War takes the skilled along with the stupid and those in between”.

This is simply a story which had me hooked as I wanted to know who the voice was, I wanted to believe in a happy ever after always knowing that war and life is not like that. A good novel which explores another part of World War Two and if you enjoy reading fiction of this era, then this is a book you must read.

I am looking forward to The Way You Look Tonight which picks up this story from one of the characters and takes us to another part of history. I wonder where the author will go next with his writing. He certainly has a lot to offer readers like me.