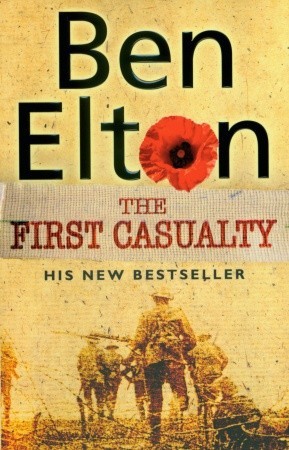 From the cover and the blurb, you know that this is a book about the First World War. You also know that Douglas Kingsley, our detective is being sent out to Ypres to investigate a murder.

All of that in itself, makes for an interesting read but the book starts so far away from it that you begin to wonder quite exactly how all the pieces are going to be woven together. Douglas Kingsley objects to war. Objects so vociferously that he ends up a prison. He ends up being the victim of violence by those who he previously caught and no one can possibly understand the reasons behind his objections. Kingsley cannot understand the legalised violence of war.

There are some dark forces at work everywhere, even during the war and Douglas finds himself knee-deep in war when he never asked to be.

Using the clear logic that he tried to fight his case for not fighting, Kingsley begins to piece together the death of an Army Officer and published poet. It seems that the war cannot cover up murder. But then Kingsley has to reconcile himself that there is murder all around him, but dressed up in a uniform and covered in mud. Elton leaves nothing to the imagination and described the sheer horror that these soldiers had to face on a daily basis. At times it was squeamish but it really leaves you with an impact when as readers none of us have any first hand experience of it. If the book be commended just for that alone it is a worthwhile read.

This was a book which took some time to get going, the murder is not as you would expect at the beginning but half way through and it seems the pace changes once this has happened, because for so long I could not possibly see where any of this was going and therefore had to keep reading.

This was my first experience of reading Elton’s books. It was well written and did not put on any rose-tinted spectacles to cover some of the nastier elements of war and death. I thought it was a good book to introduce many people to the use of World War One in fiction and also that of using such an event to base, what is also a crime novel as well.

This was my book club’s choice. We thought we should be reading some World War One fiction during the next four years as part of our commemoration.  It was a completely random choice on my part and one that I am pleased about.

I have never read Ben Elton before but of course loved Blackadder goes Forth which is set in the trenches, which he co-wrote. (ironically I disliked the first three series) He could well have just taken that from the screen and turned it into a novel, but he has not and that has made the book for me a much richer experience. I could certainly see though this book on the screen, it reads very much like that, but perhaps that is because of Elton’s knowledge and experience in that particular field.

The question I am currently asking myself is whether I would read any more of his novels? I am not sure is the answer, so if you have read any and can recommend then please let me know.