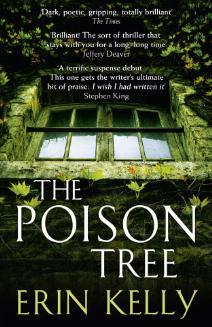 I tend to avoid reading the ‘comments’ they put on books which are trying to effectively sell you the book. “Dark, gripping and atmospheric – shades of Rebecca” all sort of put me off, what if I actually don’t agree with that stance?

It is the blurb and recommendations from fellow readers that made me pick this book up. I was immediately transported back to 1997 through the eyes of Karen one of the three main characters in this début novel by Erin Kelly. Karen is telling the story now, some ten years later.

This was a year that brought about a lot of changes for Karen, she was coming to the end of her educational life and was a student who found the whole studying process easy. Her knowledge was vast and intense and she had had a different university life to many of her housemates. But as she comes to that cross roads she takes a rather unsuspecting turn and ends up meeting Biba.

Biba is effectively everything that Karen is not. She is a wild child, she felt she was free to do anything in her world despite the constraints of the world she actually lived in.  She wanted to be an actress, she was the drama queen, the people she surrounded herself with flattered her ego and made her life much more exciting than Karen’s boundary defined existence.

Karen is absorbed into Biba’s world, moves in with her and an intense friendship begins which shows Karen a very different view of life. Sharing this world and the only one protecting Biba is her brother Rex. Their relationship was more protector and protected, it was strained and there was something rather odd about it. I thought one thing, but I was not sure, the book and the characters caught me that way. As the book progresses you see it analysed more through the eyes of Karen as she fell more into Rex’s circle and was ever increasingly moving away from Biba’s madness.

What started as an adventure for Karen, ends very differently now that Biba and Rex have drawn her into their world. I could not see where this book was going, what was going to happen to them all, I had many ideas of the undercurrent that was being built up by the author but I was wrong on all counts. I had to keep reading because as the pieces were coming together I did wonder who Karen actually was.

As with all memories, I wondered whether Karen’s had changed events over time and that this was a clever way of conveying to the reader the story. Rather than a dual narrative, where there is a more defined course and as readers we can see actually what happened, this was Karen’s view. Clouded by what we would only find out as we kept reading and turning the page?

Can you ever be free of the past? Can Karen deal with secrets buried about yourself and others? Are they just acting as a slow poison waiting for that final moment when it will all come tumbling out….

A different read for me, not my normal choice of book. But it was great to be captured by something that I did not know about and be taken on a journey into a different life.

As for those words to describe the book, as I look back now having it read. I need not fear that I would not agree. I do wholeheartedly.

I have had this book on my shelf for a while and chose it because well, why not. But also it was one of my challenge books for the year and also I do follow Erin Kelly on twitter and it seems rather rude to have not read at least one piece of her work. I have another of her novels on my shelf waiting as well.

What I have found intriguing about this book and it simply only occurred to me when I began the review, which I do hope gives the book a small amount of justice, is why 1997? Then I stopped and thought about it. The world went through some rather major changes and events in 1997, Great Britain was no different. After 18 years plus of Conservatives a new era was beginning, the Labour party had won a landslide election. A generation (mine actually) had suddenly got the vote and everything changed. The UK handed back Hong Kong to China and colonialism became another chapter in a history book. The death of Princess Diana sparked something that this country had not seen, in its “stiff upper lip” past – grief on a mass scale. Then I thought actually 1997 was a good year to have picked as the background for the story of Karen, Biba and Rex. It was one that was always going to stay in many people’s minds for many different reasons and it seems a good reflection for Karen, Biba and Rex to live with in the future.