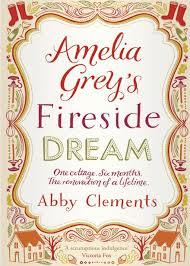 Amelia has a dream of a cosy cottage, an open log fire, with all the rooms decorated just so. All her own work. It is a dream, she really lives in a flat in London and is a teacher in a secondary school.

But actions force Amelia to confront her dream head on and finally she is out of London and in the country. Working her way to creating the perfect cottage. It is not going to be easy for Amelia nor is it going to be perfect.

Rather than walking into the perfect place, Amelia and her husband Jack decide to makeover a cottage which needs a lot of work. Jack, is less than reluctant about the whole idea from moving to the country let alone renovating a cottage with no skills of their own.

Amelia is a determined woman and character and she begins to throw her whole energy to this one task. She has mood boards for each room, which precede a number of the chapters as we see this cottage come to life but Amelia’s stability with Jack, her mother and her new-found love, a dad who owes money as well as a rather spiky teenage sister start to crumble.

This is a very light read but for me was  a bit like watching a renovation programme on television from beginning to end, all the details, the stresses and strains of renovating and the problems and discoveries along the way. It felt like the characters were added in after all of that. Which is a real shame, because I thought the book had potential, especially when Amelia found something about the previous owner. But that really was rather glossed over and could have developed a lot more.

A book for fans of dreaming over interior magazines and the like. But if you want a story with a lot more substance then I would pass this book by.

I hate to be disappointed by a book. You spend energy reading it (and obviously money buying it) and you hope to get something back from it. I was sadden that this really was like a Country Life magazine brought to life and that the characters were an afterthought. It was as if the mood boards, which were created take on a life of their own and the story was formed, then there was the case of fitting some characters in. Trouble is they did not fit in well and I found it a struggle to actually like or dislike them.

I enjoyed seeing the cottage develop and yes I would love to live in a cottage with no neighbours, in a village where you can feel part of the community, it was a bit like reading a dream that many people including me have. Reading a dream but not reading a story.

It is with reluctance I would pick up another novel by this author. However I am always prepared to give the benefit of the doubt.