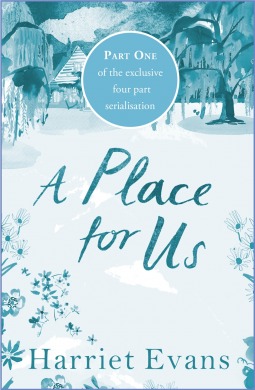 This is a very different sort of approach to not just the review but the book as well. It started when I received a letter from Headline, telling me all about a new book from Harriet Evans which will be released in January 2015! In Six months time. Well if that is not a tease what else is?

The book A Place for Us:

“is an emotionally charged novel that will wrap you up in a warm embrace as it nodes to the golden age of epic women’s fiction but with a vibrancy of its own. The author introduces the Winter family, ostensibly a picture perfect household set in the beautiful bucolic surroundings of Winterfold”

Now I have never read anything by Harriet Evans before, I have a vague recollection of perhaps picking up one of her books in the past but never actually reading it. I was intrigued by what was going to happen in this novel, so my interest was piqued.

Then came a parcel:

In it was the press release, a postcard inviting me to Martha  80th birthday party. It states on the card, there will be an important announcement made. As well as family tree of sorts which shows you the names of characters and how they all seem to be encircled at Winterfold.

Well it would have been rude not to accept the invitation.

So as you can see by the top right hand part of the picture, there is the book – but not all of the book. No Part One on the book. The “digital bods at Headline” have decided to wet literary appetites by releasing this book as a series, digitally starting on the 31St July. (The state of the book is atrocious – this clearly is my fault for getting it wet whilst in a torrential downpour – I hang my head in shame)

And so to the book, we are introduced to everyone that you can see named above.

Martha Winter is turning 80 and she decides to turn her whole families life upside down. But we don’t know why, we don’t know how all we know is that it is going to happen at her birthday party, to which we have all been invited.

Of course we are going to see other people

David, Martha’s husband. The creator of Wilbur the Dog and Daisy, cartoon characters that has kept the money coming in and infiltrated everyone’s household. Trouble is Daisy was not a fantasy character.

Daisy is in fact Martha and David’s daughter who lives in India and hardly ever returns to her family home and everything she left behind. Including Cat.

Florence is Daisy’s sister and she also is not in the vicinity of the family home. She has her parents love of art an is a Professor employed to lecture in the city of her name.

The two girls, have an older brother Bill, who as the local GP is the one who is around his parent’s the most. A character who came across as the reliable one, not flighty or have sort of fancies. Trouble is his life is not all that it seems and his younger wife Karen, seems to be distracted.

Lucy Bill’s daughter is trying to make her mark in journalism, but is struggling that is until the vulture of her editor hits upon the idea of life with the creator of Wilbur and Daisy. Could Lucy be about to bring the past hurtling into the present?

Of course there are more characters, and the first part of this novel is setting the scene, we learn about them from each individual chapter set aside for them but we learn even more when they are mentioned by others. It is a slow start,  but it is the right start, anything else would mean that the book would peak too soon and our interest will wane.

And so it looks like everyone is going to return for the party……..

That is where Part One ends and I cannot wait for Part Two.

This is an interesting idea and I have never read anything in serialisation form before. Not even those books or excerpts that are published in newspapers/magazines. This must have been what it was like when Charles Dickens was creating and weaving his tales. Teasing the reader with all the information and then making them wait, whilst he concentrated on another part of the story. It is certainly working for me.

So what is going to happen in Part Two?