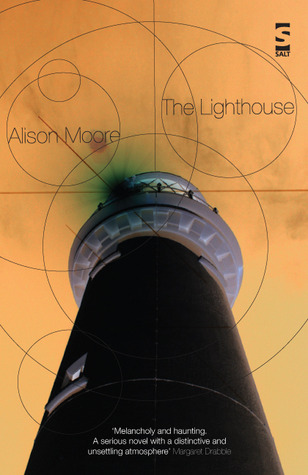 A man stands on a ferry. He is going on a walking holiday to Germany. With him he only has what he needs and a small silver lighthouse.

A woman sits at the end of the bar. Her husband is working behind it. She is drinking. It is early and she has the bedrooms to clean. She is in a hotel in Germany. She has a small silver lighthouse.

This novel alternates between these two characters. Futh is trying to rediscover a previous walking holiday he had with his father, in the hope that it might contain the clues to what has gone wrong with his current life.

Ester is trying to blot something out about the past through the present of drinking gin and sleeping with strangers as her husband works downstairs.

This is rather an odd story which is very difficult to review, it goes somewhere but nowhere at the same time. What carried me on was the writing, it was so well written that actually when I came to the end and felt that I had perhaps missed the point, it did not matter. A reflective novel, which showed how lonely the two main characters were and I felt sympathy and frustration with them at differing points. Futh his past life was frustrating as he did not seem to acknowledge what was going on at the time and Ester with her present, sympathy for the life she had got herself into.

As for the lighthouse, is it that one singular light that guides us through life? Or does it have another meaning when the light is not shining and guiding you?

An interesting novel if you want to explore something that does not fit neatly into any sort of box. Because life doesn’t does it?

This was a short story, less than 200 pages. I think I bought it on a whim upon seeing it on a Waterstones table. I certainly did not go out and buy it intentionally but knew of its existence through seeing it mentioned on blogs etc. Like purchasing it, I picked it up on a whim to read, because I was after something short. I really did not know what I was getting and I am not sure having read it I still do. Nonetheless it has shown me that short stories have their place and their impact can be just as intense as a big thick book with interwoven plot lines and numerous characters. It is a book which will certainly divide.

I think I will certainly look at Alison Moore’s new novel He Wants (to be published in August) and see how I get on with another short story and whether the impact is there.