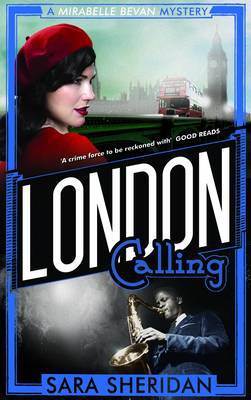 Mirabelle Bevan might have found her niche in life since, the Second World War and the Nineteen Fifties are starting to show a changing world. Her administration role in the debt agency as moved up a notch as she is now in charge and has an assistant Vesta Churchill. The work is flooding in and they are busy. Perhaps they need some help.

Enter Lindon Claremont. He is not help, he comes with a problem as well as being an old friend of Vesta’s from London. He has fled to Brighton because he knows he is the prime suspect in the disappearance of a young girl, socialite  Lavinia Blyth.

They convince Lindon that if he is innocent then he should return and everything will be fine.

He does and it is not.

So the debt collecting is left in the hands of new character Bill Turpin, an ex policeman with a commanding presence. I sense that we will see Bill feature more in subsequent novels.

Mirabelle and Vesta head to London.

There they find that the world that Lindon was surviving in was rather seedy and murky. Whilst the jazz he was playing might have been uplifting the company certainly isn’t. But why would seemingly good débutante girl Lavinia be haunting such a place.

It takes some skill to find out the truth and it looks that maybe Mirabelle has stepped into a world similar to her experiences in the Second World War and that she is putting too many people in danger.

The book as the first one did, captures the Nineteen Fifties wonderfully. The rebuilding of London after the war is continuing, the foggy and dark streets create an atmosphere both tense and thrilling which adds to the plot of the story. Sheridan is certainly not afraid of tackling race as an issue and shows the segregation that was apparent in parts of London and the treatment of blacks. Even her own assistant Vesta encounters such a problem at the hotel. This is not a book that is rushing through the Fifties but covers the first two months of 1952. Great Britain by the end of the book was facing a very different age and monumental change.

A crime novel with a huge dollop of social history in it which makes a very different read and one I would applaud.

First of all I have had this book since beginning of 2013 to read which is shameful as I got it from the Amazon Vine programme. I had put it by my bed to read earlier in the year. Then I heard that Sara Sheridan was going to be at the newbooks Reader’s Day on 28th June in Winchester and therefore, it would be rude not to have at least started the book. Well I started and obviously finished as her next novel England Expects is already out. I am looking forward to hearing what she has to say as I have many questions:

How many Mirabelle Bevan books have you planned? Where did you get the names for Mirabelle and Vesta from and what is the reason behind them? Why the 1950s? I admit it is a refreshing change to read books based in the 1950s, which I think is a missed decade. Is there any truth in the conclusion of London Calling?

I hope I get to at least ask one or two and perhaps get her new book signed too.

The books are lovely to look at and will definitely look good on a shelf. I might therefore have to invest in the first two. I wonder if  that is all part of the future of the book?