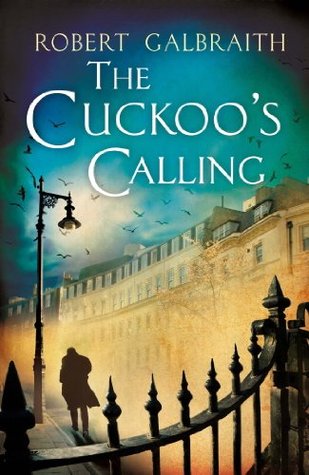 When I picked up this novel, I knew it was by J.K. Rowling and in the main that is why I probably picked it up. It was a bargain on Kindle. It has sat there for about four months and I have only got round to reading it when I saw the next book was due out.

Cormoran Strike is a private detective but not a very successful one it seems nor is his personal life. He is living in his office, but trying to convince all temporary secretaries that he is not. He is trying to make money to pay off his debts but with only one client this seems impossible. The woman who it looked like he was going to spend the rest of his life with has left him; for his friend. Plus he is having to deal with adapting to having lost a leg in Afghanistan, whilst serving his country and he knows he should take better care of himself but seems to make that one of his last priorities.

Just when he thinks it will all be over, two people walk through his office door.

First  to enter his office is Robin. 25 years old, happily engaged to Matthew who is looking for a full-time job. She just happens to get a temporary one at Cormoran Strike’s office. Within minutes of their rather abrupt meeting, Robin has somehow changed the whole dynamic of the office, even without clients. It also seems that she has some skills which might prove useful to Cormoran.

Second is John Bristow, his sister a famous supermodel, known as Cuckoo falls from a balcony. But did she fall or was she pushed? The police say suicide but John is convinced otherwise. He wants Cormoran to get to the truth, trouble is when dealing with the famous there is a lot of smoke and mirrors which seem to be hiding the truth and Cormoran is going to enter a world where he needs to look past it.

And so the novel really begins in earnest. In fact as Galbraith uses in the book very early on

“Bombarded with the story, you grew interested against your will, and before you knew it, you were so well informed, so opinionated about the facts of the case, you would have been unfit to sit on a jury”.

I would say that was a good description of the way I felt about the book and the case that Cormoran was investigating. Of course it is reference to everyone who when reading in magazines, online and watching programmes believes they know the person so well that they could give you the real answer, despite never knowing them at all.

Cormoran reminded me greatly of Jackson Brodie (Kate Atkinson) and their were times when I felt I could have been reading about Jackson Brodie and I had to keep reminding myself I was not. It was the ex solider, somewhat loner with disastrous relationships with women and his ability to be able to bounce back from some rather nasty scuffles that left me with this image in mind. However there is not enough given away by Cormoran to make us aware of the real man, obviously so the series of books can continue but so as readers we can start to form independent opinions of this new investigator who has graced our bookshelves.

His sidekick is obviously going to be Robin, which is what made it very different from Jackson Brodie, who generally relies on his own skill. Cormoran can see that sometimes you need others to be able to find out the truth. You need to work together, a skill he would have no doubt picked up in the Army but one that was probably tested when he lost his leg. Again you can see a thread which will be continued in the next novel.

I liked the book, I enjoyed it and so what if it was written by J.K. Rowling. If you like crime/investigation genre novels then you will like this one.

There are times when I write reviews and I simply just want to say, it was a good book you will enjoy it if you like that type of thing. This was one of those books. Which is why it has taken me a bit longer to write the review.

I am reluctant to put it up on Amazon (as I do with all my reviews) simply because reading and reflecting on other people’s, you first of all always think yours is no good but also that the amount of comments that have been made is quite staggering. The main gist of them is that this is a book written by someone who is phenomenally successful and rich and write children’s books and therefore cannot possibly deviate onto another type of genre or course. It makes me want to hang my head in shame. By all means comment if you have read the book, but don’t lambast someone who wanted to do something without the whole media watching and waiting for every word and to pick it all apart bit by bit. Which is why I think there is much in this book which is having a dig at some of these perpetrators and the fact that the media is focussed on quite a lot in the book. There are some days when the worlds media have a lot to answer for.

I will post it on Amazon and see what happens……