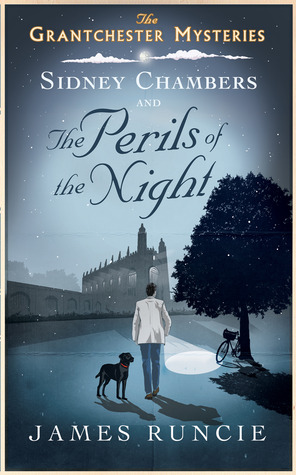 I am back with Sidney Chambers and his faithful dog Dickens. In this second volume we are taken from the mid nineteen fifties through to the early sixties. It is Runcie’s intention to take us to the eighties with these volumes.

Not only is Sidney trying to remain faithful to his chosen vocation, a canon, he is yet again coming across murders and mysteries that needed to be solved in Grantchester As his father comments “Good God, man, it’s like the Battle of the Somme out there”.

All the time though the mystery that seems to be evading him is whether he should finally embark on marriage. And whether it will be Hildegard or Amanda.

As before we have six separate stories which link by means of character and place. But other than that they are individual, although to read them as such would perhaps spoil the overall plot and wonderful gentle tone of the book.

We are taken from university high spirits and ascending the buildings at night, fire at a photographic studio where some of the pictures are destined to never get beyond the top shelf. Then there is poisoning and deception as well as bit of espionage for good measure. A book that covers many ways to kill and deceive others.

As you can see this is not your average detective crime fiction it is something much more than that. Sidney Chambers gets himself involved in some rather testing cases and is either a help or a hindrance to his friend Inspector Geordie Keating.

What I will say about this novel is there were some parts of it that left me rather confused. In the main these were the religious elements and there is perhaps more theology in this book than in the first one. If religion is something which has not featured heavily in your life then you may well struggle as I did. The other struggle was the explanations and descriptions of the cricket. If cricket is not your game, you may find yourself skim reading one of the stories.

Runcie leads us to a nice conclusion at the end of the sixth story and I am not sure how Sidney Chambers is going to cope with the swinging sixties in the third volume.

Historical detective fiction which covers as much of the social attitudes as of worldwide and political events of the day as the book goes on. This really feels such a gentle read and you can take time to sit back and enjoy, that you forget perhaps the darker crimes that are committed within the crafted stories.

I am enamoured with this author and these stories and much enjoyed the two books so far in the series. My other main delight is the fact that when on a shelf they look great together and I cannot wait to build my collection. Sometimes it is just not the beauty of reading the words that the book contains, but the beauty is in the book itself.

The third volume Sidney Chambers and The Problem of Evil is published in May 2014.