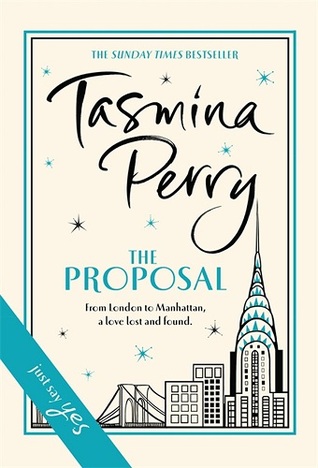 This is the first Tasmina Perry novel that I have read and I had a preconceived idea about what I was going to get. Something light and fluffy.

I got a story that was strong, which had a dual narrative which is a plot technique I favour. Tasmina takes us through the modern-day with Amy Carrell an American girl who has moved to London to further her career in dance. Trouble is she is stuck waitressing and her boyfriend, Daniel seems to be in another class to her. But when she spots a Tiffany box at home, she thinks that maybe she is going to be asked the ultimate question?

The question though is very different – daniel’s parents question the suitability of Amy as a wife. It seems that rather than celebrating, Amy is going to be broken-hearted.

It’s coming up to Christmas and Amy cannot afford to go home and be in the arms of her family. Randomly she spots an advertisement asking for a travel companion for an elderly lady to travel to New York and she decides why not – if it means even seeing her family for a small amount of time it will be worth it.

In steps Georgia Hamilton, a lady of a bygone era when it was all about dresses, money, men, position and doing ‘the season’. We are taken back to late Nineteen Fifties, the last ‘debs’ are going to be presented to the Queen and Georgia Hamilton is not that keen she has a rather more independent view of how she wants to live her life. But needs must it seems and Georgia takes us into the world of posh frocks, the romantic nature of stolen glances with handsome men, competition over the best parties and ultimately who gets the boy. We look back with rose-tinted spectacles perhaps but it was a different time and one not that long ago and it felt like I was experiencing a social history lesson right there on the page. So wonderfully described and showed the contrast to the modern parts of the novel.

But as these two characters come together and the two eras are compared, we begin to see how good Amy and Georgia are for each other. How the secrets of the past, because you know Georgia is hiding something come to the present and how Amy can see that if you are not true to yourself or love, it is ultimately going to pass you by.

The hurt is going to live with you forever; it has for Georgia.

Georgia’s history becomes Amy’s present and the two forge an unlikely friendship which results in some revelations that will be a shock to us all.

I loved the way Tasmina Perry took us through something so simple as a Christmas Party held in the Tower of London and painted a scene so magic that you felt you were there, to the sights and sounds of New York and the upper class places that perhaps the ordinary new yorker would never see. I felt like someone reading a travel guide to New York, especially as I have never been. Even the warmth of Amy’s family leapt off the page which was in complete contrast to the descriptions of family life that Georgia was experiencing in the Fifties.

This book has everything that you could want for a great story, you learn, you feel emotion and you are taken away to another place. I recommend it highly.

As I say in my review this is the first Tasmina Perry book that I have read. It was kindly sent to me by the lovely people at Headline and I am most grateful for this as I have discovered an author and her books that I think I am really going to enjoy. Which is good because there are a couple more waiting to be read.

I am much fascinated by the whole ‘debutante’ process and ‘the season’ I think because it was not that long ago in reality. The 1950s were changing so dramatically and fast, there seemed to be a sudden need to come out of the War Years and for the young to enjoy life. Ironically enough I love watching, period drama (Downton Abbey included) about what upper class life was like, knowing that is was going to radically changed in less that 50 years. It was also refreshing to have a dual narrative book which did not go back to either of the World War’s.

I really do recommend this book. It is one to devour whilst reclining on your chaise lounge with chocolates in a posh box!