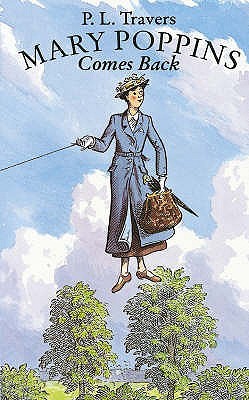 This is the second of the Mary Poppins books and it is very much in the same format, a series of short stories which can be read quite separately. Dipped in and out of as the reader sees fit.

For whatever reason, Mary Poppins arrives back at Cherry Tree lane, and it is probably best not to question the lady about it, just accept it. Don’t forget according to the thermometer she is “A very Excellent and Worthy Person, Thoroughly Reliable in every Particular”.

The more I read of this rather upright, conceited but rather mystical and magical woman, I realise how much Walt Disney sanitised her for the screen. There are recognisable characters and scenes in this book that made it to the screen, but actually I had placed the film to one side whilst reading and read them for what they were. Magical Adventures for children (and no doubt adults) featuring, balloons to carry you into the sky, being transported into the Royal Doulton bowl and a green meadow depicted on it, an evening out with the stars (in the sky) and the arrival of a new baby to swell the numbers in the nursery at number Seventeen Cherry Tree Lane.

Mary Poppins is still grumpy, a stickler for the rules and having things just so, especially her vanity when ever she passes anything that gives her a reflection but there is still the magic and that is because ” what Mary Poppins thought…nobody never knew, for she kept her thoughts to herself and never told anyone anything……” And we won’t know as Mary Poppins, has gone again………until next time.

I am rather enjoying these stories, and like dipping in and out. They are just right when you have only a bit of time to read, especially when tired, I am sure I dream about magic journeys into the sky, tea parties on the ceiling and being carried by balloons. Mary Poppins Opens the Door is the next book and that will nearly take me to halfway through the huge omnibus edition that I am reading them from.

One thought on “Mary Poppins Comes Back – P.L. Travers”