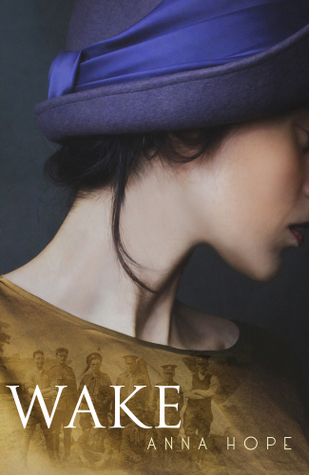 Wake is a word that conjures up different meanings and images.

The wake held after the funeral of a loved one.

Wake when you emerge from sleep

In the wake of what has happened.

In fact in Anna Hope’s debut novel, all three of these meanings have been woven into a moving  story which will stay with you long after you have finished it. In fact the tomb of the unknown soldier and the cenotaph are there as permanent reminders.

The body of the Unknown Soldier is making its way from France to London, to be buried in Westminster Abbey and the city is awaiting this unique moment. The war is still raw in many people’s hearts and they have yet to move on or find the strength to see that this permanent monument is theirs forever.

Three women in London, have all experienced something very different by the war. They do not know each other, but they all have one thing in common – loss.

Ada is grieving for her son, he has not come home. His body is somewhere in France and she does not know where or how he came to be killed. Ada keeps seeing her son everywhere, she needs to lay his ghost to rest. There seems to be something that she does not know.

Hettie is young, she works in the Hammersmith Palais where you can buy a dance with her for a few pennies. Her brother is shell shocked and just exists at the family home.

Evelyn worked in munitions during the war, she has the injuries and experience to prove it. Now she is working for pensions and deals with those men who came back and tries to forget about her love who did not.

As the story unfolds about these women, the body of the unknown soldier is returned and the book follows the five days charting the journey of this unknown man to his final resting place.

We move through all three women’s personal stories both in the present and more importantly the past. You feel for the women, you empathise, you sympathise but you also want to somehow let them know that the world is a changing place and that time does move on and their legacy will always be remembered. It is an emotional story to get completely absorbed by, it has some rather sombre moments when you realise the number of those who never came back and were buried out in fields far from home and their loved ones. The women are bringing differing angles and viewpoints to what is happening at home. And as the city begins to swell with those wanting to glimpse this unique event, the women, unknown to each other become ever closer in proximity and all of a sudden it all begins to fit together and is done so with care and respect by the author.

War is something that is part of our lives and our history and to remember not just those who were taken from us but also those left behind all have a part in the history. Anna Hope brings this book to a quiet conclusion, one that was fitting to the book and to the memory of everyone lost and all those that remain.

This book is definitely going to be one of my books of 2014. Even though it is only February. This is a book that I think everyone should read this year, especially as we are remembering 1914.

The idea of the unknown soldier fascinates me. I had some rather sketchy knowledge of how it came about but this journey which Anna Hope shares in her book, made it all the more poignant. If that tomb gave only one person a memorial for their missing loved one, be it husband, father, brother or lover then the whole process was not in vain for anything.

I am always moved by the fact that Royal Brides have left their wedding bouquets on the tomb and even more so that Queen Elizabeth, the Queen Mother who was the first to start this unique tradition requested her funeral wreath from her daughter was laid there.

Thank you to Transworld Publishers for sending me this book for review, you have made me think and cherish much from reading it. I endeavour to go to Westminster Abbey and stand and reflect at the tomb at some point in the future.