Another month gone and well into the year, February always goes quickly, but then I suppose being the shortest month it is bound to!

A mixture of reading, mainly because it has taken me until near the last few days of the month to settle down and embrace the reading. Routine has probably set in now with work and I have really enjoyed the books I have read. This month was lacking in crime and thriller, probably a good job really as the book club choice was Pierre Lemaitre – Alex which was an excellent read and one that kept me reading when I should have been sleeping. I had no idea where it was going and it was one of those books where actually you change your mind so clearly and definitely about a character that it is going to surprise you – and it did not disappoint. It was also a success with book club to.

I needed something to cheer and cleanse the brain after reading Alex, so I went back to the old faithful of Maureen Lee and read her latest paperback novel – Flora and Grace. Not one of her strongest but just the restoring faith sort of story that just carried you along. It is an almost annual ritual reading one of her novels and long may it continue.

Another book to cheer the soul for February (it has needed some cheering) is Katie Fforde – Highland Fling*. This one takes us to Scotland with a failing business and a grand house. Plenty of cooking and food and mysterious men to gives us and the main character an adventure. I am slowly working my way through Katie’s novels and thoroughly enjoying them.

Alexandra Brown – Me and Mr Carrington*, is whilst a short story and the only one read on my kindle this month is the stop-gap between her debut novel and her second which was release at Christmas. It reminded me of the characters and kept me i contact with the series of books that the author is developing.

You could also say, I have embraced further short stories with P.L. Travers – Mary Poppins Comes Back*. It has taken me a whole month to read this particular book, the second in the Mary Poppins series and it is part of an omnibus book which I cannot cart around anywhere. So I am confined to reading it at home. Although there is a common thread through the tales, they can all be read as independent little stories and all I can say is Mary Poppins is nothing like Julie Andrews!

Two new authors this month and both dealt with war in some way. Mary Fitzgerald – When I Was Young* is a novel that I am struggling to describe. It was both moving and romantic, it dealt with the aftermath of war and the long-term effect it can have on those around them. Love is the only thing that can hold an eclectic mix of people together.

The book of the month, and certainly one that will be the book of the year is Anna Hope – Wake*. This novel from a debut author deals with the return of a soldier from France to take his position in Westminster Abbey in 1920 in the Tomb of the Unknown Soldier. The same time that The Cenotaph is officially revealed as a permanent reminder of the loss of war. Whilst this major national event is building, three women are awaken to the reality of what has happened to them after the guns stopped firing in 1918. This is a must read book, even more so in this the hundredth year of the outbreak of the First World War.

Some great books and some tried and tested favourites, and that is what reading should all be about. New discoveries and old favourites. There will be more of the same in March I can be sure of that.

*Book Review yet to appear on blog. 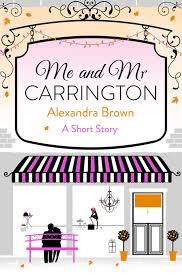 When you don’t have time to become absorbed into the latest offering in a series of books, a short story sometimes just fills in the gap until you have the time to read a full length novel or the next instalment comes out.

This is exactly what Me and Mr Carrington is, it’s a bridge between two full length novels about Carrington’s department store set in Mulberry on Sea. Georgie is on cloud nine about her relationship with Tom, it all seems to be going well and even a romantic trip to Italy seems to have strengthened their new relationship.

However, back in the real world of the department store and luxury handbags, Georgie is struggling to cope with the fact that she is in love. When a customer happens to drop Tom’s name into conversation, suddenly Georgie thinks she may have got it all wrong. Has she?

Alexandra Brown has captured the love of a group of a group of characters all featured around one setting (department store) and encapsulated it in this series of books. I looking forward to reading the next full length novel and finding out more about the world of luxury handbags at Carringtons.

The only trouble is the next book is a Christmas themed one and can I read that when it is not Christmas? Or do I wait and then have two to read come the end of the year, as Ice Cream at Carringtons comes out in the summer? Decisions…..