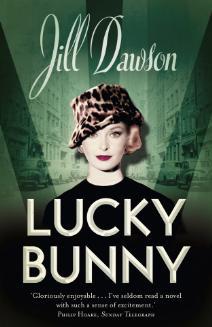 Meet Queenie Dove. That is not her real name, but it is the one she wants to go by and the one that we as readers have to accept.

Lucky Bunny is Queenies’ story. In fact it is almost like her curriculum vitae. It takes you from her beginning, that of her birth with all the details in the 1930s through her life in intimate detail of the world that she lives in, to around the mid 1960s.

It is a world which has loose morals or none at all. It is a criminal world. It is the world that Queenie was born into and the one she has to survive in.

At no point are we asked to feel sorry for Queenie, or to be honest make any judgement on her. She is stating the facts as she sees them and observes all those around her and how they influence. Her petty thieving to keep her and her little brother fed moves up a notch when she becomes trained by more career minded criminals and she gets a kick out of stealing. The high it gives her is like nothing else.

The lows are obviously there, especially when she ends up in Borstal as youngster and as an older woman in Holloway. The truth about her mother is finally revealed and she sees how it is possible to have the truth hidden from you. However her thirst for the glitz and glamour of life is what seems it run through her veins, despite all that she has seen and taken part in. It is the highs that Queenie loves and it is those which give the story its rather light and dark moments.

This book has thoroughly been researched and I think brings a wonderful example of social history for a thirty year period in the East End of London. It also shows you the strength of women who were emerging into a very different world from that of pre war and how they did not have to put up with the weak men who thought themselves strong. This is a book which celebrates the strength of the female character and paints the male as the weak and not to be considered worthy, but it does not do it in an obvious way, just subtly by the characters that Queenie involves herself in. Throughout the book you will recognise the names and you will then begin to think that perhaps Queenie Dove did exist and I am sure she did in some way or another – but this lucky bunny is purely a figment of Jill Dawson’s imagination.

Will be Queenie be lucky in the end? Well with one final job she just might be? But this is the beauty of fiction when you finish the book, you just being to wonder….maybe….

I cannot remember why I picked up this book to buy. More than likely, the cover and also the blurb on the back gave me a tease into the world of the nineteen sixties which is not really covered in much of the fiction I have read. It gave it a sense of time and place when you recognise names such as Ruth Ellis and the Kray Twins, name which have become synonymous with the fifties/sixties of London, that we seem to refer back to as the real criminal underworld.

This was an interesting read and I did have to remind myself that this was not a real person, but a fictitious character because I was absorbed in the book it became easy to believe that Queenie did really exist.