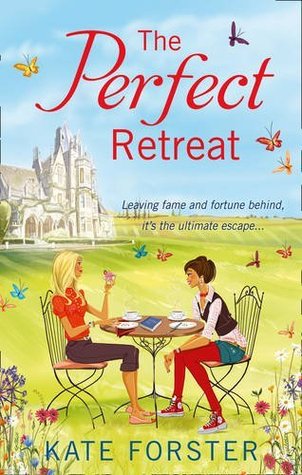 Willow is famous. She has everything, the lifestyle, the money, three beautiful children, the nanny to look after them, the rock star husband and an Oscar as well to adorn her mantelpiece. But so much of this is simply show. She does not have the life that many think she has and when the doors are closed to the media and outside world it is a very different story.

Trouble is when you are famous, everyone wants to know about what happens behind those closed doors and when her life is splashed across the tabloids it seems that Willow and her children cannot hide anywhere.

In steps the nanny, Kitty Middlemist who is struggling with her own life and certainly needs to keep her job and allows Willow to seek solace in her family home Middlemist Manor. Trouble is it is going to disturb Kitty’s brother, Merritt when they all descend on the home, especially when he is trying to get the building into a more habitable state ready for sale. However with Willow’s arrival there opens up an opportunity to save not just her, but the Manor as well. For Merritt it even looks like his sister might finally get what she wants too but will he be left behind?

This was a story that drew me in from the very beginning and this was through the strong characters. It was as if the front pages of the tabloids and the well-known ‘celeb’ magazines had taken life and formed themselves into a proper story where you could actually feel something for them other than contempt. I wanted to know what happened to all the characters, even those who really got under my skin and I only wanted bad things to happen to them. I cared about them all; the reclusive, the man plucked from obscurity and thrust into the limelight, those who help behind the scenes to make the famous ‘famous’ and keep their lives going, those wanting to hide. The character mix was good.

Because of the strength of the characters, and in the writing of them, the book moved along at a good pace. Added into the mix, the lifestyle between the bright lights of London, the film world of LA as well as the house in the West Country it brings a different view to fame and fortune. With some surprising shocks along the way, that I could not predict as well as some I could and I am glad they were in there, this is the perfect book to retreat away from the world and escape into for a few hours.

This was one of those books which I stumbled across on Amazon for my kindle, it was cheap so I thought it was worth a risk. It was and that is one of the great things about kindle, there small cheap discoveries you make that take your reading journey somewhere else! I am off to download The Perfect Location.

One thought on “The Perfect Retreat – Kate Forster”