The title explains this book. If you are expecting a book about David Suchet’s early life and some kiss and tells then you will be very disappointed. You simply need to love David Suchet’s portrayal of Poirot and you will love this book.

This book is about the love and perhaps sometime hate relationship between Suchet and that little Belgian detective who has graced our screens for 25 years and been in the written form for nearly 100. 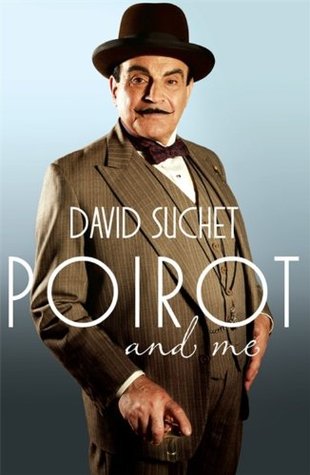 The book opens ironically enough with the end, the end of the character Poirot in the filming of Curtain. (He actually went and filmed three more after this so as not to end on the end). Suchet goes back to the beginning and explains how he was chosen to be Christie’s most famous creation and how he inhabited his world with equal obsession and passion from the beginning. We are getting a glimpse into this world as well as the world of making television dramas on the scale that sometimes we would only expect to see in a cinematic form.

There are plenty of interesting things in this book, the unswerving support of his wife is quite clear and it is obvious that he probably could not have done the role without her. The fact that at any point Suchet could have been disregarded for another actor, he was not actually contracted to play him in subsequent series from series 2. The thought of that now seems unimaginable. The immense detail that Suchet went into to make sure the Poirot was portrayed as Christie envisaged him, led to some disagreements on set.  Throughout the book, Suchet was concerned that he did not want this great detective to be laughed at. With him but not at him. I cannot think of any point when I have wanted to laugh at him – I hope others feel the same. Suchet is Poirot and Poirot for me will always be Suchet.

Interspersed between all this Poirot ‘talk’ is what Suchet was also up to in his career, here in this book merely to place reference and time between episodes of Poirot and the filming schedules. You forget the other work he has done, a lot of it on stage as he has become part of the British consciousness as simply being Hercule Poirot.

This book is for those who love the programme and the actor. It does not give any plot outcome away, though if you are reading this you have probably already got a fair idea of what happens. It is simply the insight and perhaps the workings of an actor’s mind and method.

It is a book full of the love of the little grey cells and there is order and method to the book. Poirot would heartily approve.

I did think I was going to get a bit more about Suchet in this book. But actually having read the book I am so glad I did not. This was a fitting tribute to Hercule Poirot and the culmination of all the stories being filmed and broadcast.

I am not sure how much is David Suchet in this book and how much is Geoffrey Wansell, you can never tell with books which are a collaboration. I am hoping by the fact that they were friends means that it was in the main Suchet.Sort of ruined the illusion for me.

I must comment on the cover of the book, the front bringing Poirot (as it should be) the back being Suchet. This for me epitomise how much Suchet became Poirot.

My only one regret is not being able to go and see Suchet speak about this book and get my copy signed. I could listen to him talk about Poirot for hours! I wonder if I might need to hear this book in the audio version?