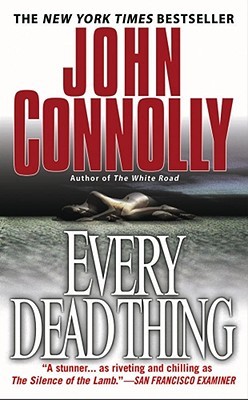 This is not my genre of choice it has to be said, but as it was a book club choice, I had to give the book a fair chance. Charlie Parker is introduced to us in this book, which is the first of a subsequent series. It is always best to start at the beginning of such series as I feel you get a better understanding of characters and background. Charlie Parker has left the police force, his drinking had taken over his life and he loses his wife and child in horrific circumstances. he wants justice for what has happened and when he is asked to investigate the case of a missing girl it brings him in very close contact with information that could help solve the death of his wife and child.

Parker becomes involved in the other side of the law and has to befriend people he would have normally arrested in his previous role as he investigates the missing person case. But as that is solved, he finds the path he is going down is taking him to the person who killed his wife and daughter; someone known as The Travelling Man.

Parker is a loner, but despite grieving for his wife he finds himself attracted to a female pathologist who becomes embroiled in the world that Parker is now inhabiting and strives to find the answers to the questions that everyone is asking – who is the Travelling Man and when will this killing spree end.

This is not a novel for the faint heart, the body count is into double figures well before half way through the book and I did get rather confused with the number of characters and how they all related when they then turn up dead some few pages later. This book is divided into four parts and the story for me was wrapped up after part one and I could not see where else this was going and how anything that had happened could possibly be related.

I admit to struggling with the book and was rather confused at times, I think this was down to the sheer number of characters, their names and the American setting. However, I persevered and actually had an inkling about the conclusion and whilst I was not spot on I was certainly far off and for that I applaud myself as it means something of the book must have got under my skin.

If you are a thriller lover and you like the thrills of your reading to be somewhat graphic and gruesome then you will enjoy this book. It is clear that the writer has done his research and has applied it correctly throughout the book, especially for a first novel. This is a book where you enter a world which is very different from British Crime Fiction and is something quite unbelievable but you keep reading to try to understand everything in this dark and evil world where every couple of pages there seems to be a dead thing.

This was an interesting choice for our Book Club and I will write a short roundup about the evening soon. Let’s just say it was not a book the rest of us would have chosen.

I struggled with this book, the violent and gruesome crimes actually did not bother me much, they might have made me wince a couple of times, but it has never affected me and I certainly did not need to read it with the lights on or have any nightmares about it. What I did struggle with was the structure of the book, what seemed to be one story done and dealt with when it was quite clear there was more of the book to read. I needed to refer back to that first part I am sure and would have done so, if I had not read this book on my kindle. That is one of the downsides of the eReader – with a book you can flick back easily and find the place you need to reread information on. I needed to do this with this book, which makes me consider rereading the ‘actual’ book again to see if I gain a better understanding of it all, especially the characters if I can refer back. I was somewhat lost at many a point.