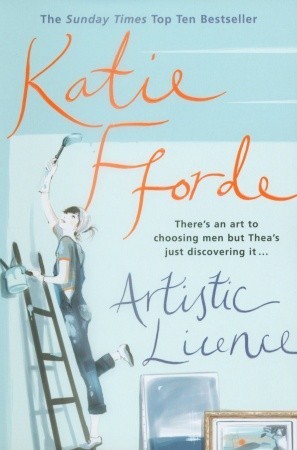 Thea has had enough it seems of her lodgers. They do nothing to help her and she is in a cycle of cleaning and cooking with hardly any time for herself and although she has a passion for photography and art, it is not solved by working part time in a photography shop sorting out abysmal holiday snaps. She is living in this chaotic bubble.

When she has the chance to go away with her friend Molly and meets Rory, she suddenly makes a rather unlike Thea decision back home, not even leaving the airport by turning tale and going to Ireland to see him. Rory has one thing on his mind and Thea is tempted but his paintings seem to move her into another direction and she thinks that maybe she can display them to show them off.

Trouble is Molly thinks that Thea has gone mad and follows her to Ireland, but in tow brings her annoying niece Petal, also a lodger of Thea’s, as well as distant family relative, Ben  and his young son, Toby. Thea it seems can’t quite escape the chaotic life she leads, even more so when Rory’s dog decides that she is going to have her puppies right when everyone arrives.

Setting her self a challenge and not wanting to fail she tells Rory that she will display his paintings in a more provincial setting if he makes sure he does not sell himself out to the highest bidder. Rory accepts, but you know it is too good to be true and when Thea finds herself having to do a lot of the work herself and rely on money from Molly, it seems she maybe out of her depth.

This is an escapism read and a quick one at that. I did not think Thea came across quite so chaotic as I think the author wanted, but Molly was suitably annoying and her Rory was one of those men who you wanted to be so angry with you couldn’t because of the charm that exuded from him. Toby was the sweetest little boy who was trying to just get his father to love him, but Ben seemed to be angry and on edge all the time.

The plot was very fast and we moved from Cheltenham to France to Ireland to Cheltenham around the country and then to London before finally resting in Cheltenham. It was rather exhausting and perhaps did not give the reader used to where you were before we were off again. Although maybe this added to the chaotic turbulence Thea seemed to be in.

If you have never read a Katie Fforde, then perhaps not start with this one, I did feel it was not as strong as some of her other stories but it is a pleasant diversion nonetheless.

Another one ticked off the Katie Fforde list and I absolutely loved the fun with all the puppies in this story which I was glad to see repeated in her latest short story which is coming up on this blog in a few days time.