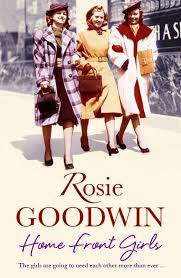 It is always worth remembering that those left behind during the Second World War were fighting their own wars. Wars on the home front as well as personal wars and in Rosie Goodwin’s new book, this is very much the case for the three main characters.

The most privileged and snobby of girls that you may ever wish to meet is Annabelle, who has had everything and suddenly the war changes that and rather than wait for it to be delivered to her she is going to have to go out and work for it and work hard for it in very trying circumstances. She finds some resolve from deep inside her.

Lucy is trying to hold a family together. She has a sister who is socially awkward and a brother in the army. With no parents, she is very reluctant to ask for help and it is only through kindly neighbours and her friends that she can start to forge a life for herself. Sadly though, the past is still with her and she cannot shake it off. But comfort can be found in many different ways.

Dotty has nothing to lose, as she starts out in the world of work. She had nothing to start off with. An orphan girl who spent all her youth in a orphanage is very much aware of surviving whatever is thrown at you. But her skill as a storyteller and the imagination she retreats into opens doors for her that would perhaps have otherwise remained firmly closed. But some doors are opened to reveal the past and what she once knew is changed.

These three girls strike up an unlikely friendship as they begin to work at the department store Owen Owen in Coventry. And whilst, Annabelle groans about the lack of silk stockings and the fact she has to carry her gas mask everywhere, Lucy is worried about her brother in the army and the news from the front and Dotty is rather shy and unsure of herself and the outside world. War begins to have a very hard effect on the city of Coventry.

When the department store they work in is bombed and nothing remains, the girls have to start again and this time, they all forge different paths whilst trying to maintain their friendship. They need their friendship, it is this that is going to get them through some very dark days of the war as well as the dark days of the past as everything  is shaken up and settles in very different ways for all of them.

This is an enchanting book which had me absorbed from the beginning, the way the department store setting brought the girls together and it was some time before the war really started to effect them. If you know your history you will know that Coventry suffered one of the most severe raids of the Second World War. Reading the book I knew where this was building up to and I had no idea of the devastating effect it would have on the city, the three main characters and also the storyline as well as me the reader. Rosie Goodwin captured the raid well and brought it emotionally to life for me. This was a book where I could see where the author could take us, and at points she did go there but there was a lot of unexpected occurrences and events and I enjoyed the book much for it.

Thank you to the publisher Canvas for giving me the opportunity to read this book.

It has been a long while since I have read what many people call aga sagas – and this book also very much reminded me of the  Maureen Lee novels that I read.  If this is the calibre of the authors writing then I will be back for more. In fact I now have a sudden desire to dig out any novel on my shelf like this and start reading them.