It is the future. America ceases to exist. The land is Panem, the states now districts, 12 separate districts with distinct functions. District 13 was destroyed in an uprising against those who rule and it has to be noted very early on in the book – those that control not govern. A direct result of this and to remind everyone the Capitol runs what is called The Hunger Games. 1 boy and 1 girl (no younger than 12, no older than 18) from each respective district are chosen to fight. To be known as tributes. To be the only one to survive. To kill all opponents and deal with whatever the Gamemakers throw at them. Only one person must remain at the end. 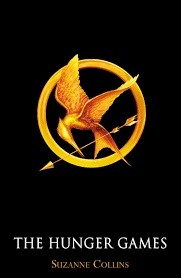 The book features heavily on the structure of the Hunger Games, how it comes to be that those who are chosen go, through to the preparations before they enter the arena. Everything is controlled even by those on your side – in Katniss and Peeta’s case – Haymitch (the only other District 12 winner) as a mentor, ‘stylists’  to make the most of each tribute and of course the actual game itself. We meet the other tributes, we learn of weakness and strength. How it is to survive. About trusting people and the bonds of friendship. About control. Katniss and Peeta learn a lot as well.

This book reminded me strongly of Big Brother (the television programme, not reference to George Orwell’s 1984) the way the players are manipulated for audience enjoyment. Where your life is given over to someone else and that to have an opinion or to break the rules has consequences far reaching and does not solely affect one. The book for me is an extreme form of this reality television which dominates schedules and I think it is a reflection of the society we live in. We seem to be addicted to watching other people fall apart or in this case die. Reading about such an event as The Hunger Games was bad enough, watching it would have been horrific. The descriptions are vivid; the story brought so much to life it actually became believable that this has already happened if not a possibility for the future.

The manipulation by those in charge in the Capitol was ever present in the way the games are played out and it was in stark contrast to what Katniss was trying I believe to do. To be true to herself. It is an interesting take on the way government works and how perhaps a reader can contrast how much control there is in the present day governing strategies around the world. I have often wondered on how much we are ‘told’, how much control there really is.

I admit to struggling at the start, mainly because the use of the unrecognisable names, the districts was confusing and because it was certainly out of my comfort zone but I overcame that quickly and it had me gripped. I had to keep reading, as I could not see where it was going, and how it was going to come to a conclusion; one survivor not winner. Winner seems a rather hollow word to describe the eventual outcome. It seems with the Capitol’s control there are no winners.

A clever novel, which is more than good and although this is pitched as a young adult novel I think everyone should read it as it resonates on so many levels. There is much that can be discussed about a number of the issues throughout the book; it questions morality, the rights and wrongs of killing, but handled appropriately I thought for a Young Adult market. It is a book which is still with me long after I have finished it and I have not even got to the others in the trilogy.

Thanks to my friend L who passed the book onto me. I knew of the existence of these books, I started book blogging just as the third book came out and saw it featured a lot. Because it was Young Adult I dismissed it, foolishly I realise now. This is a book I would not have read. I just would not have picked it up as its post apocalyptic and that is certainly a theme/genre I would avoid.

The category of Young Adult is an interesting one, and I had to keep reminding myself that is where this book is from – it seems so much more adult than that. It should certainly not be confined to such a category. I read a few YA books over the past few years and am always amazed at how much I enjoy them. Ironically when I was of that age, I do not think they even existed. If they did then they passed me by.  In my opinion the YA fiction out there at the moment is a great stepping stone to fiction and I look forward to discovering more.