Rather than three individual posts to talk about these books, I thought I would sweep them up into one post. My reason, because they are the sort of books you buy for folk at Christmas. I have read,looked, dipped in and out of, chuckled about all three of these books but they do not count towards my number of books read in 2012.

First up is a book which was on my Christmas list and then it came on offer for the small sum of 20 pence on Amazon Kindle and I am afraid, that the Scrooge in me, the accountant in me and the impatience in me meant I struck it off my list and bought it myself – reading it straight away!

1,227 Facts to Blow Your Socks Off as I write this post is still available for 20 pence. It does what it says on the tin as they say, and a must for all fans of the programme or those people who like to gather silly bits of knowledge to throw in at quiet moments during dinner parties. Allow me to share some of the ones that made me chuckle – try and spot the irony as well!

The last little QI fact there leads me nicely on to the next book that I want to recommend.

Great for again those who like little bits of knowledge and also perhaps those people from distant shores that perhaps never visit London in their lifetime or only visit once. This book fills you in on all them interesting ‘well I never’! Again I am going to share a few with you so you get the idea of the book. I bought it when it came up on the Kindle Daily Deal having never seen or heard of it or the author before. There is a sister companion, by the same author The Little Book of the London Underground which I could be tempted by! 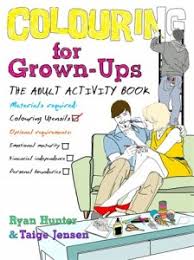 And if you ever get bored with all this knowledge, perhaps you might feel the need for some colouring in. Colouring for Grown Ups: the Adult Activity Book is pitched as “the joy of children’s’ colouring-in meets the mind-numbing realities of adult responsibility. How many of us doodle in meetings or when talking on the phone. This book just takes it to a new level.  This will make a book for someone you really find difficult to buy for! I know which of my friends will be getting it – and I might even buy some new felt tip pens to go with it!

For sharing with this book, here are a couple of example pages. Thanks to the book’s website for letting everyone in on the experience.

Of course you could always buy all three of these books for yourself – I won’t tell!