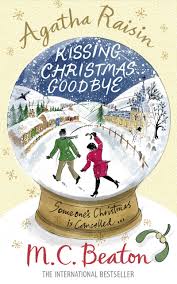 It’s only October but Agatha Raisin is after the perfect Christmas and wants to outshine last years attempt(if you know Agatha then you know it would have gone disastrously wrong!)

In the meantime, before the festive season descends, a letter arrives for Agatha at her detective agency from Phyllis Tamworthy claiming that a member of her family is trying to kill her. Agatha dismisses it as madness, but curiosity gets the better of her and she sets off to meet the formidable Phyllis and her rather beaten and down trodden family at Phyllis’s 80th birthday.

And as only can be expected, the prediction is true. And so the family employ Agatha to find the truth, despite her being the one that finds the body and rather getting up the nose of the local police force. On top of that is the introduction of a new character Toni Gilmour who is a young girl who comes to work with Agatha and seems to have all the luck, to finding lost dogs, divorce cases and murder. Toni is everything Agatha used to be, young and attractive and at the start of her life. Agatha feels she is becoming more invisible, to those around her. Only solving murder will keep Agatha in the spotlight, that and her Christmas to beat all Christmases!

Although not quite Christmas throughout, more as the conclusion to the book than the theme, it is a formulaic Agatha Raisin and you still get some of the village characters such as Mrs Bloxby the rather subservient vicars wife but also more branching out with those that work with Agatha at her detective agency.  This is book 18 in the series and although I have read the first 7 of the others in order I definitely felt I was missing out on some of the back story of the detective agency mainly and also the breakdown of her marriage to James Lacey. So far she has not married him where I have read up to! However despite these spoilers it has not put me off reading all the ones in between, it will be just like finding the right jigsaw pieces to make the full picture.

This was my book clubs choice for December, light and fun read was the main and I warned everyone they were a bit like Enid Blyton for adults. I will report back on what they all think.

As I mention in my review I missed out on something, jumping from book 7 to 18, now I am going back to book 8 and I am sure it will all make sense. Perhaps I will make it another challenge for 2013, as I did for 2012.