Along with P.D. James new novel Death Comes to Pemberley (currently remains unread) which I won last year through a competition on the newbooks magazine website came two complimentary tickets to the Jane Austen House Museum at Chawton. I also set visting here as one of my challenges for 2012. Chawton is only a forty minute or so car journey from me through some lovely countryside, country lanes and villages all festooned with bunting and flowers. I am lucky with the fact that both the sea and the countryside are within in spitting distance from where I live.

Anyway, with a plethora of Bank Holidays I thought I would take up the chance to go and have a look before the tickets expired. So with my mum in tow (and dad chauffeuring) off we went. I was not sure what I was expecting but I think if I sum up that I am glad I did not pay for the tickets that probably says it all.

It is a very nice house, larger than you think from the outside and the garden was lovely despite the rather unseasonably chilly and windy weather. The garden was set out with lots of names of the plants which were common in the Nineteenth Century and the benefits of all these flowers and herbs. The mint was particularly aromatic and I spent a lot of time sniffing trying to distinguish between peppermint, applemint, spearmint and the like. The lavender another favourite spot.

You cannot take pictures in the house but for me there was not a lot to show you. A lot of the artefacts were replica or were there because they were ‘of the time’ with no link even tenuous to Jane Austen. I think it was to give a feel and atmosphere if you will of the kind of house Jane lived in for the last eight years of her life before her untimely death. There was plenty on the walls to read but it did not capture me that much that I wanted to spend absorbing it all in. 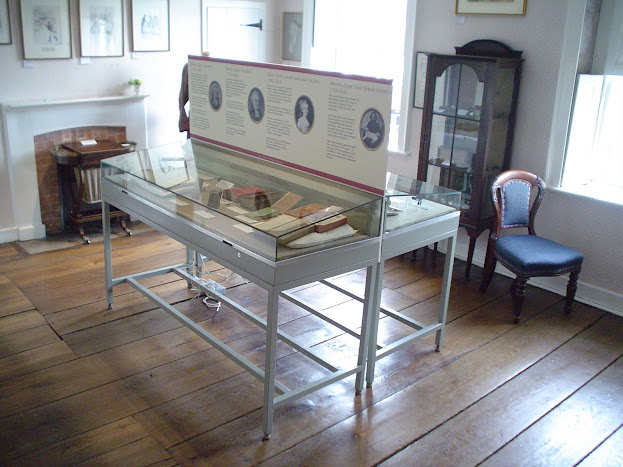 Jane Austen arrived in Chawton, at thirty-three and took possession of the cottage that is now the house together with her mother and sister Cassandra and a long-time family friend, Martha Lloyd. It is set in a lovely village, (although the rest was shut for the bank holiday!) and I could quite easily have dreamt many a day away about living there and becoming involved in village life and creating romances as Jane did. But for Jane the house was where most of her preparation for publication of her most famous works was done as well as writing some of them.

There is little to see with exact items and the museum acknowledge that it is a small collection, although the jewellery was beautiful as was the quilt stitched by Jane and her mother which was kept in correct lighting to protect from damage (hence the reason for no photographs). I loved the quilt. That was a small part, a lot is excerpts or photos from other collections (including all the visual media that Austen has generated) and some of the furniture belonged to other Austen family members. As I say it gives a sense of the time and place, compared to what fills our rooms and homes today it is very sparse but I think has a particular draw. Imagine writing by quill and ink on such a small table on paper, when now we have computers, laptops and tablets either on desks or balanced on our laps. How times have changed and are still changing. There is something though ‘quiet’ about the place when you realise here is the home where an author created another world and characters that we are still talking about, studying and watching on the screen both big and small today. That is some achievement, regardless of the fact that I was disappointed by the place.  I can see why many find it an enthralling place to visit, but for me I was not captured enough; maybe I need to read more Austen than the one I have read? Perhaps then I will revisit and see it all very differently?

I smiled at the gift shop, very small and compact and with lots of stuff you could buy. I was tempted by the second Cora Harrison book Jane Austen Stole my Boyfriend because I liked the first. But knowing I could buy it cheaper online, I held back. As is ever though when I go visiting or my mum does I always get a bookmark and that is what I came back with. There was a lot of ‘Mr Darcy’ memorabilia if you will, mugs, mats, cards, bookmarks, posters (actually Colin Firth) to name a few. However my mum summed it up very well. What do I need any of this for? I have my very own Mr D’Arcy. And so she does as that is our family name.