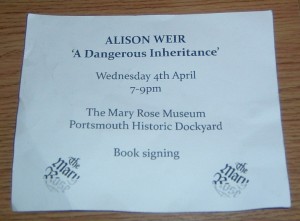 It is only since I have started blogging, that I have realised I am missing out on so much when authors ‘come to town’. You get a chance to speak to the people who bring your favourite characters alive or introduce you to completely new ones. When I spotted this little gem local to me, I could not resist and so decided that the money, because sadly it was not free, would be well spent, educating myself and doing something completely different!

I have read Innocent Traitor by Alison Weir a couple of years ago and loved it so much. I am a fan of historical fiction and I have even  thought lately and commented on a few blogs that it had been a while since I had read any.

What more of an incentive then to go this event at the Mary Rose Museum. It is a good many years since I have been in the museum and seen the wreck, but I realised as soon as I stepped in there how much I missed all things ‘history’. Not just historical fiction, but the fact that my degree is in history and all this history on my doorstep that I probably take for granted. I suddenly have a yearning to study again.

It is thirty years since the wreckage of the ship was raised from the Solent, and it is currently undergoing a major conservation project and the whole museum is being rehoused along with some 19,000 artefacts in a fantastic new building. And all  is due to open in late 2012. In fact after the Easter holidays are over, much of the current museum is being shut as more conservation work and the movement of artefacts goes across to their new home. So the timing could not have been more perfect.

What a wonderful place therefore to have a talk by an author who concentrates a lot on all things Tudor! Alison Weir’s new novel A Dangerous Inheritance is published in June 2012; The Tower of London, 1562. Queen Elizabeth I sits insecurely on the English throne. A young woman of twenty-two, Lady Katherine Grey, has just been arrested. She is the Queen`s cousin, and she has dared to marry her lover secretly and produce a child who might live to challenge Elizabeth`s title. Will the Queen demand the full penalty for treason, a penalty once suffered by Katherine’s sister Jane, the nine-days Queen?
Eighty years earlier, Kate Plantagenet, the bastard daughter of King Richard III, hears terrible rumours that her father has had his nephews, the two Princes in the Tower murdered. She cannot believe it, and desperately tries to find out the truth. But it is left to Katherine Grey to discover what happened to the Princes, and to lay three unquiet souls to rest, before she must endure her own tragic fate.

I got the chance to purchase said book earlier, have it signed and got to talk to the author and also her mum! A delightful lady who thoroughly approves of her daughter’s work and having chatted with her later on in the evening, informed me that Alison started paying attention to what she said from the age of 14, I think this love of history certainly came from her mum.

A brief half an hour for purchasing and signing of books, plus a little wander around the museum and the chance to handle some of the artefacts before Alison gave a talk about her book. Wonderfully presented and very interesting about her reasearch of the book, the language she uses, the characters she chose and also the fictionalisation of some of the story. Alison then read some passages out of the novel as well.

I would say that the thirty or so in the audience, of mixed ages and sex were enthralled and we all clasped our books to our chests not wanting it to end, but at the same time to rush home and immediately start reading. I chatted to another lady on her own, who told me that she was a fan of Alison’s and had a notebook ready to take recommendations. The one that sticks in my mind, she had read was Josephine Tey’s The Daughter of Time, because of its references to Richard III, who also features in A Dangerous Inheritance. A must read for me now for sure.

Afterwards, there was another chance to chat to Alison and also wander round the museum. Rather a pleasure when it is just open for you! I foolishly did not take any photos of Alison as to be honest I felt stupid asking if it would be alright to and whether someone else could take the photo for me. Nonetheless, I know for future.

However, I did take some photos of the museum, not that many as there is strictly no flash photography and all the items are kep behind glass in special light for preservation purposes. So the few I have taken please excuse the certain amateurism of them. 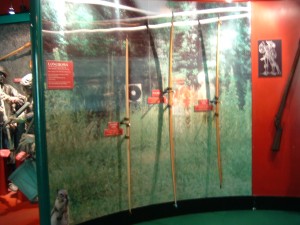 A lot of the museum is very interactive which I think is great for children (and adults alike!). Here you can have a go at pulling on the longbow to see how strong you are. I took this photo, because one of the items that we were allowed to handle was a replica arrow, the real one was there, without metal tip but kept in a case and was rather heavy! I have forgotten what the circular arrow holder was called, but this held 24 arrows, which was then held over your shoulder and if you were a seven year old boy this would have been your job – firing them at 12 every minute, that is a change of every 5 seconds, to pull said arrow out, and fire on said bow. All seven year olds at the time were trained in such matters without exception – can you imagine that today. Health and Safety…… 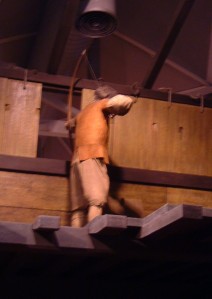 Cameras, reduced light and no flash, plus artefacts in cases, as I say do not make for good photography, but I was rather pleased with this next photo. 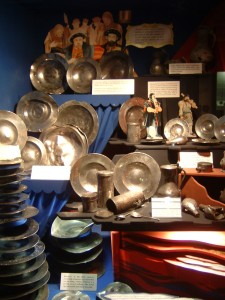 Rather boring in some respects, a load of old plates and jugs. However these were the utensils that the officer class; those that belonged to the gentry or even aristocracy used on the Mary Rose, and it was to show the wealth and status  that they had back on land. The lower ranks ate and drank from wooden ones.  Some 500 years later, we have moved away from pewter plates and wood to more modern methods. Interestingly there is still the divide between the officers and the lower ranks. Officers crockery is now of the more china variety and comes with a gold band around it, drinking vessels come with cups AND saucers. Whereas the lower ranks, have more ‘robust’ crockery with only plain colour bands around it and cups come sans saucer!

The museum was lucky enough to have displayed the costumes from the television series The Tudors which was broadcast on the BBC, but was actually meant for an American audience as they had originally commissioned it . Some (!) liberties are taken with historical accuracy but I do not want to cover that, as I have actually not watched all of the four series. Something now I must rectify having immersed myself in all things Tudor.

I have tried to pick the best of the photos taken, and actually these probably do not do it justice. I peered close up at some of the costumes, the beading and stitching was exquisite which you never see on the screen.

And to show the difference in the perception of Henry VIII, here is what greets you at the front of the museum 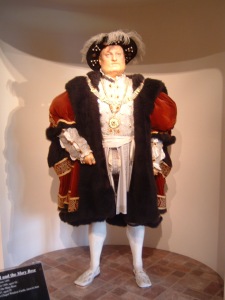 I have already started the book, which I am enjoying and already learning so much. That is the beauty of Alison Weir’s novels. I am so inspired to then find out more. Of course there will be a review once complete and nearer the publication date. In the meantime I have provided a couple of  links for you to peruse at your leisure: