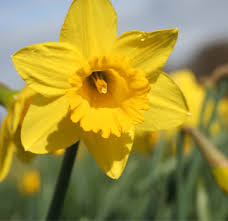 February has been and gone with an extra day this year, and exceptionally warm weather. Sat outside in the sun reading, albeit with a cardigan on but something which in February’s past would be unheard of. It does mean that the daffodils one of my favourite flowers is out and brightening up the roadside, the garden and the living room!

None of my challenges have been touched this month but that does not matter. Although in some ways I have been doing an anti challenge and buying books! Does that count? Lets not mention it, yes I agree.

So as I look at my ‘daffs’ what have I been reading? Well it feels like February has not been a great month for reading, I have read 6 books which is reasonable and as I do not set myself a target I have nothing to complain about. I think I am disappointed with the fact that I have too many books on the go it just gets me all muddled and a lack of concentration then sets in. This was uppermost in my mind whilst I was reading Helen Dunmore’s – Zennor in Darkness. This book held such promise and I was disappointed with the story. I then felt I could not pick up a book at all for fear of them all being a disappointment. The book did pique an interest in D.H. Lawrence and I learnt a bit about his life which I did not know, and I must commend her descriptions of war, but the rest was just rather disappointing.

Then opposite to all of that, I went from complete disappointment to complete enjoyment of M.L.Stedman’s debut novel The Light Between Oceans (published in April 2012). Another book which is based around the First World War but transports us (no pun intended) to Australia and the Lighthouse keeper down there isolated but not alone.

I then got to the stage when you have enjoyed a book so much you do not want to read a new one, for fear of upsetting the book you have just read. If books were real emotional beings that is. So I went for some easy reading you might say and picked up Lucy-Anne Holmes and (un)like a Virgin. I expected normal fluffy chick-lit and I got more, which as I devoured the book in one day on a very pleasant Saturday I had set aside for myself I found another author who surpasses the cover for which the book is given. It goes with that old saying “never judge a book by its cover”. We all do it I am sure and yes sometimes we get it wrong.

Whilst on about covers of books, I was not drawn to this one and would actually have avoided it in a bookshop because it is pitched for those who watch Scott and Bailey on ITV1. I am not a fan of buying books with the tv-tie in pictures plastered all over the front. I prefer to stick to the original. However, when this landed on my doormat I was intrigued, it is pitched as a prequel to a television programme that was never originally a book so I was in the mood for a bit of crime and dived straight into to Dead to Me by Cath Staincliffe. (Published April 2012). Crime and Thriller books are a fairly new genre to me, I always knew they existed but it  has not been until I started blogging that I have delved more into the genre and found a plethora of authors and books to enjoy.

I seem to be falling into a pattern of reading a gripping book at the beginning of the week and by the time it is finished and Thursday/Friday is round again I am after something a bit more easy-going. I would have thought with the pressures of life it would be the other way round. However, easy reading came in the form of M.C.Beaton and Deborah goes to Dover on my kindle bought for a bargain a while back. Review to follow in the coming days. I have one more of these to go in the series and I will move on to some ‘other’ M.C.Beaton as the whim takes me.

Talking of kindle bargains another one I got before Christmas The Graveyard Book by Neil Gaiman. I started to read a sample and thought this would be good so bought the book, at the same time somewhat surprised that it was actually a children’s novel. It was good but I am not a fan of fantasy genre novels as a rule, Harry Potter not included here.  Sometimes reading a children’s book with adult conceptions and knowledge we perhaps ask for me a bit more?

So that is the books I read and I finish the month with too many books on the go again – too many good books that I want to read? Or too many average books that are not grabbing my attention? You will need to join me in March to see how I get on.