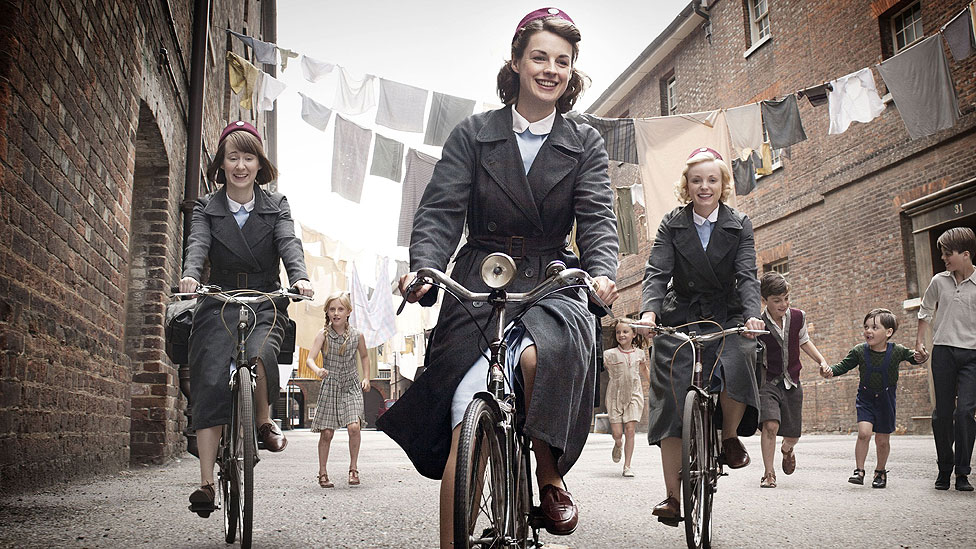 I have scheduled this post today, to coincide with the premiere of Call the Midwife on BBC One tonight, Sunday 15 January at 2000.

Call the Midwife is a moving and intimate insight into the colourful world of midwifery and family life in 1950’s East London. We are introduced to the community through the eyes of young nurse Jenny Lee as she arrives at Nonnatus House to live and work as a midwife alongside an Order of Nuns.

They have adapted the wonderful books by Jennifer Worth into what is an ideal sunday night tv drama in 6 episodes. I came across these books by pure accident I seem to recall and have read all three.

This is a book not just filled with stories of midwifery and tales which will make your eyes water but of something else. This book is a social historical account of what life was like in Fifties East London. The social change that was happening seemed to be slow, slums which were condemned for demolition were still fully occupied and life both new and old continued in them.

Worth brings a human side to these problems and starts at the beginning of her midwifery career as a 22 year old in a convent for her training. Do not be fooled, this is not something out of the ‘Sound of Music’ these Sisters were committed and dedicated not just to their religion but to their job and the looking after of others, whether with training the non Sisters to be midwifes or out of the kindness of heart.

In the second of Jennifer Worth’s memoirs of working in post war London, you are not getting the same as her first book Call the Midwife. This is a good thing.

We have moved on from the stories of births and babies, though they are still present but onto three main tales all related in some way to the Workhouse. If you know very little about workhouses and your only experience of them is seeing Oliver Twist asking ‘for more’ then this book will give you all the grim details, descriptions and stories about what went on. Remember they were there to help people, a very primitive form of social care.

A great second book, and so good to know the characters and place but to have a completely take on life there in nineteen fifties and before. Three stories that make you realise what has changed and also what has not, you learn something along the way.

Farewell to the East End is the third and final `Midwife’ book by Jennifer Worth. She has excelled herself again with stories of the East End of London, their inhabitants, their births and deaths as well as the tales of her colleagues especially the Nuns. Fans of Sister Monica Joan will not be disappointed.

I have tried to avoid regurgitating the stories featured in this book into the review, lest you will not go and buy the book and enjoy them yourself. There is a sense that the end is coming for the area that Worth works in, the convent and the Nuns who reside and work there and Worth’s fellow midwives are moving on in different parts of their lives. Although the end it is now fast becoming the beginning of the next adventure for them all.

Her final book which deals with dying and death is called ‘In The Midst of Life’ I have yet to read, but it is on my shelf and I think it will be a fitting end to a very worthy (no pun intended) series of books. Some memoir type novels have a way of not telling you anything and I have experienced that greatly recently with Below Stairs and My Lady’s Maid. Worth’s novels are actually so much about social history, medicine, disease, social comment, class systems, progress and life and I have yet to find any similar novels that have lived up to the high standard of these.

I was sadden when I started reading more about this programme that Jennifer Worth sadly died in May 2011 shortly before filming began, although according to the press pack released by the BBC she gave guidance and her blessing to the project.

I am hoping that the BBC do it justice and with Heidi Thomas as the screenwriter (she adapted Cranford) and a very stellar cast we should not be disappointed.  If you wish to read more about the production, costumes, cast please take a look at the press release.

6 thoughts on “Call the Midwife – Books and TV”