I think Jason might have it sewn up. I love Alex Jones, she has a very warming personality in my opinion. It was a shame about Rory. Anita was a surprise and Lulu a disappoint. Holly has not spark with Artem. Russell is divine and Nancy has got to go edited to say she has now gone since I wrote this post. Half the time I could not understand what she was saying and I do not think she knew what she was saying either. But she brought in the viewers. Cynic that I am. Simon Cowell take note I feel. As for Tess Daly’s dresses…..

For Vests and Thick Woolly Tights….

and also summer tops and shorts. The weather has been rather changeable for October, one minute I am cold the next rather too warm. At least the white pasty legs are now covered up.

The summer quilt feels like it has not been on for five minutes then I am changing to the winter one, and doing the duvet cover shuffle when changing it but it is worth it to feel cocooned in it. 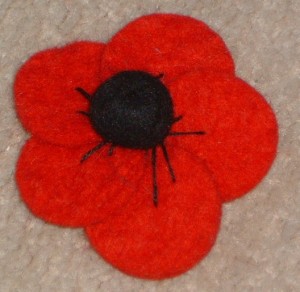 Remembrance Day will soon be upon us. After having visited the Knitting and Stitching Show, crafts with felt are quite the ‘in thing’ at the moment, and I have some other projects on the go involving felt and flowers. The flower associated with the day as we all know is the poppy and I wanted to make my own so here it is. I currently cannot get hold of the red felt circles to make more as this particular size is out of stock. This could be a one-off for this year at least.

Well when it is cold, it is time for scarves and I have just finished the wool that I bought last year and actually got two scarves out of it! That is economising. I have started on the wool I bought this year, but it is proving slightly tricky. 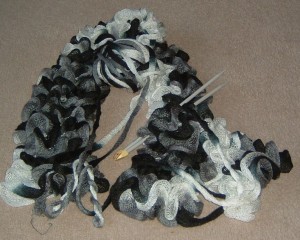 I have ordered Christmas at work and it has arrived. When I say Christmas I actually mean, new decorations and the paraphernalia for the dance and lunch we hold. Frighteningly to say this we will have it all done (and the decorations down) by 16 December! Talk about wishing your life away.

I have also ordered a few presents already for Christmas and in these economically challenging times, the task could be even harder this year.

What does this time of year make you think about?