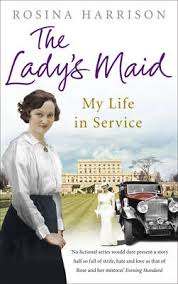 Although a new book to me this is not a new book as such. First published in the mid-seventies as Rose: My life in Service, this is a book about Rosina ‘Rose’ Harrison who from her humble beginnings in Yorkshire, through to her move into domestic service and her position as a Lady’s Maid to Nancy Astor.

Astor was the first female Member of Parliament and was rather well known in society and the company they kept, George Bernard Shaw, the influence of Christian Science as a religion and the houses they own for example Cliveden and the parties held. But this is a book not about Nancy Astor this is about Rose her ladies maid for nearly 35 years.

Rose could have told us many scandals and secrets of her time, but she readily admits that she has no desire to feed the nosiness of the reader. What she does is tell us the relationship between servants and their employers. The structure of a household in servant terms and how each person played a role, in the efficiency of running big houses as well as their masters and mistresses. There are observations of butlers, gardeners, cooks et al throughout the book. This gives the reader a bigger picture of the servant life and the things they see, they do and have to put up with.

What is important to remember that this book covers a fairly long time period of around 60 years, we have Roses childhood which I think sets the scene for later – it shows Rose’s strength, determination and forthright Yorkshire manner which made her work for so long with Lady Astor. I am sure better women would have given up a long time before!

The relationship of servant and master changed during the war years and the movement of the workforce around the country as well as the world. This is tackled during the book as Rose although called to do ‘war work’ is allowed to stay as Lady Astor’s maid as Astor was doing so much for the people of Plymouth (her constituency) and suffered at the hands of the German bombs more than once.

Rose paints a picture of hard work, which she seemed to thrive on as well as her passion to travel which was fulfilled even if it meant twice as much work for her in packing, unpacking and moving on again. Trips to America were common, as Astor was an American but plenty of travel through Europe as well as into Africa, to visit the many friends and acquaintances of the Astor family.

This book does do some name dropping but merely in reference to what happened between Rose and her ladyship. Churchill, Bernard Shaw, T.E. Lawrence and of course John Profumo. Rose has not fulfilled our desire to know what happened at Cliveden especially with the last name I mention.  Rose is forthright in her approach to her writing, this book is about her and not about what did or did not happen in one of the defining moments of political history in the mid sixties. This is a book ultimately about the relationship between servant and mistress. In this book being republished it has fed into the nation’s apparent current love for all things “Upstairs, Downstairs” and “Downton Abbey” and if you like programmes about such things as I do then you will love this book, even more so.

I am a huge fan of  period ‘big house’ dramas and I am convinced this book was republished to cash in on that. I am one of the people who fell for the hype. I am so glad I did. I would love to show you is at the front of the book is a ‘family tree’ of the household servants for the Astor family. It explains the structure of the households, from the Controller of the households to estate maintenance, stud farm, butler, valet, odd men, housekeeper, telephonists and daily maids. A plethora of staff, which Rosina Harrison does touch on throughout the book and explains about their roles and their history. This book has also peaked my curiosity about Nancy Astor. A rather formidable woman who was known for her straight talking regarding politics and her scathing wit.

The main dangers in this life are the people who want to change everything… or nothing.

Nancy, American-born, came to England in 1904 and married her second husband Waldorf Astor whom she then succeeded as Conservative MP for the Sutton division of Plymouth in 1919. A champion of women’s rights, she was the first woman MP to sit in the House of Commons (1919-45). During the 1930s the Astors’ house, Cliveden, became the focus of many high-powered political meetings. ironically enough it did some thirty years later in the 1960s. Now I very doubt anything political goes on there , as it is a hotel although no doubt they ay have the money to afford to stay!