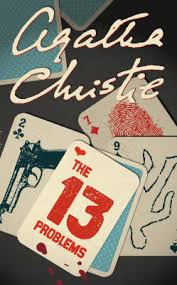 “gets very queer little glimpses of life sometimes, and can’t help speculating about them”.

It begins with The Tuesday Night Club. Six people who meet each week and each of the six in turn has to

“…propound a problem. Some mystery of which they have personal knowledge and to which of course they know the answer”.

Of course some of the six think Miss Jane Marple is of no consequence but it is her brilliant brain that helps put the pieces of many of the puzzles back together again.

As they each tell their own story, Christie takes us on little journeys of her mind and the skill and plot of her work. Many of these stories could be fleshed out into actual books. Thirteen stories make up The Tuesday Night Club or The Thirteen Problems.

The Idol House of Astarte

Ingots of Gold – Shipwrecks and Smugglers

The Bloodstained Pavement – Three people return from bathing but one is dead? This reminds very much of Evil under the Sun.

The Thumb Mark of St Peter – Poisons and widows can sometimes go together.

The Blue Geranium My link includes a link to the review of the short story as well.

The Herb of Death – Poisoning, all I know about foxgloves comes from Agatha Christie.

The Affair at the Bungalow

Time moves on and the group of people who gather changes but the principle of these short stories is the same – a personal knowledge of something with the idea that the others have to solve. We are then introduced to some other characters that feature in subsequent full length novels, Colonel and Dolly Bantry. The presence of Sir Henry Clithering as a former Scotland Yard Commissioner makes me think that any policeman in the land who encounters Miss Marple must be wary she has connections that go all the way to the top!

Christie hooks you right in and once you are convinced you know the answer she has the ability to turn the whole thing on its head and make you look at it more simply. You could say there is a moralistic turn to these stories – that all will be punished by whatever means.

“You say crime goes unpunished, but does it? Unpunished by the law perhaps, but cause and effect works outside the law. To say that every crime brings its own punishment is by way of being a platitude, and yet in my opinion (Sir Henry Clithering) nothing can be truer.”

Taken from the short story The Four Suspects. When Dr Rosen is found at the bottom of the stairs did he fall or was he pushed? All four suspects had alibis but all four are under suspicion and how did someone get a message into a locked house to say kill Dr Rosen? Or was it all just a convenient accident?  You are going to have to read it to find out!

The Case of the Perfect Maid

The Case of the Caretaker

Tape Measure Murder – Mrs Spenlow is killed but why is her husband not so moved by this tragedy. His alibi is Miss Marple herself?

The Adventure of the Christmas Pudding contains Greenshaw’s Folly. Along with some Poirot stories as well. 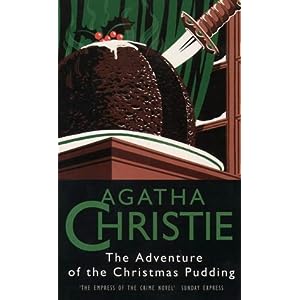 In my list of books read in 2011, I have recorded The Blue Geranium and A Christmas Tragedy to be counted in the year. I could add each individual one of these as well, but I am going to edit my list and count them all as three books, The Thirteen Problems, The Regatta Mystery and The Adventure of the Christmas Pudding with a caveat that I have only read the Miss Marple stories within them. I think that is the fair way to record them.